In 2010 the famous geneticist J. Craig Venter created the first ever synthetic life form. Venter and his team modified a version of the bacteria Mycoplasma capricolum by creating their own genetic code synethetically and inserting it. The result, because of the replaced DNA, was an entirely new bacteria called Mycoplasma mycoides.

The thing is, though, Venter and his fellow researchers did something extra clever with their homebrewed DNA. In order to distinguish it from the natural DNA present in the bacteria they added famous quotes to it. The DNA actually included a quote from the physicist Richard Feynman as well as a quote from James Joyce’s A Portrait of the Artist of a Young Man.

The it was Joyce’s estate that issued the cease and desist, pointing out that the quote was not in fair use and was still in copyright. Oops.

Via Forbes and Tor. 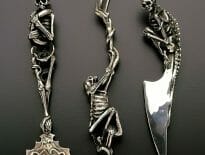