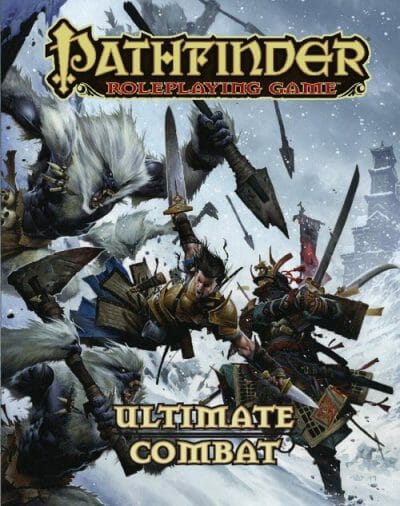 Paizo are aiming for August as a release date for their new hardcover supplement for Pathfinder. Ultimate Combat is, well, what you suspect it is.

There are three new Pathfinder RPG classes; gunslinger, samurai and ninja. The samurai is an unstoppable warrior with a code of honour. The gunslinger makes use of the new grit mechanic that will provide the framework for balanced but fantastic feats with pistol or rifle. The ninja blends stealth with martial arts.

Ultimate Combat isn’t restricted to personal combat either. The book promises to provide a vehicle combat system that copes with the likes of wagons, boats and even airships. In addition their are rules for the likes of siege weapons.

The news for people who’re not that fond of the Pathfinder RPG health system is that Ultimate Combat provides a new way to track character health, looks at using armour as means of damage reduction.

Sounds promising. It’s this blogger’s view that Pazio know what they’re doing and Pathfinder is certainly in fashion right now but they’ll have to work hard to ensure a 256-page hardcover, all about the crunchy bits, is value for money.