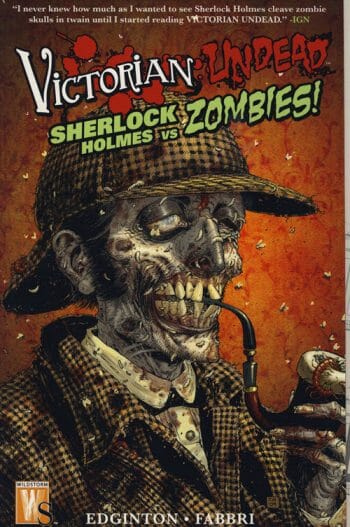 I was a zombie over the Christmas holidays. I caught something really nasty and was barely able to shuffle around the flat. I was, however, able to pick up and rip through Eddington and Fabbri’s impressive Victorian Undead: Sherlock Holmes vs Zombies.

This is a fantastic graphic novel.

Really, the title gives you summary. This is a mashup between our Victorian detective hero Sherlock Holmes and a dangerous outbreak of zombies. As you’d expect from a Sherlock Holmes story there’s plenty of mystery here so I’m not going to touch too heavily on the plot suffice to say Holmes fans should be happy. Well. I imagine some Holmes fans will be pureists and won’t be happy with the zombie mashup but I don’t imagne they’ll be tempted by the book in the first place.

Writer Ian Eddington crafts an expert story. The tempo is perfect. There’s always the burning desire to turn the page and see what happens next.

The book spans quite a significant chunk of time too. Events start in 1854 as a meteor is seen in the skies over London and the first zombie plague begins. There’s mystery in the middle as Her Majestsy’s Secret Service cover things up and Eddington weaves this nicely into the plot of the current events.

Davide Fabbri, the main artist, is equally strong. The illustrations are powerful and bold. Holmes looks like a Holmes. Doctor Watson fits my idea of Doctor Watson perfectly. Zombies are wonderful. Perhaps Fabbri’s greatest success is being able to produce a cell that blends Holmes imagery successfully with zombie imagery. This isn’t a mashup that looks forced. Visually, this is a mashup made in heaven.

It’s also worth noting that Victorian Undead: Sherlock Holmes vs Zombies is an impressive 144 pages of colour. I think it’s fantastic value for a RRP of about £15.00.

The summary is easy; I really enjoyed this graphic novel and recommend it. It helped me survive the plague.

Disclaimer: My copy of Victorian Undead: Sherlock Holmes vs Zombies was provided for the purposes of this review.