You are here: Home / Movies / Pirates of Langkasuka review 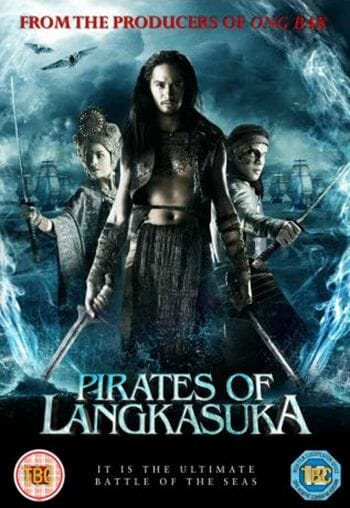 This is a film with many names. It’s known as Pirates of Langkusaka in Europe, The Legend of the Tsunami Warrior in America and Puen Yai Jon Salad in Thailand. It is Thailand’s big cinema adventure and it’s been warmly received. It’s also sometimes known as the Queens of Langkasuka.

It might be interesting to speculate why the movie has two English language titles. Is the word “Tsunami” seen to be inappropriate in Europe? I can’t say there are very many scenes in which islanders get killed by magically summoned waves but I suppose it’s a possibility. I suppose it’s also possible that there was a legal challenge around “The Pirates of…” prefix from the states. Just for the record, Lankasuka is not near the Caribbean.

Lankasuka was a real kingdom. It might actually have been the first on the Malay Peninsula. There are mentions of it by Chinese chroniclers.

That’s the academic bit for this review. I found the background interesting, so did the research but none of that is necessary to enjoy Pirates of Lankusaka’s blend of magic and martial arts.

What we have are the pirates and a renegade Prince teaming up to destroy Lankusaka. The pirates are lead by Black Raven – who’s mastered the magical arts of Dim Lum. Lankusaka, our heroes, have a brave member of the royal guards as their best hope of defence.

The wildcard comes from the survivors of a pirate attack many years before. The pirates attempted to intercept two cannons coming from Holland to Lankasuka but they failed to capture the transport ship and the cannons sank into deep ocean instead. The apprentice cannon maker and a baby boy survive.

The film has two threads at the start. We have the efforts of the brave royal guard to defend the queens of Lankusaka against assassination. They’re up against all foes from the magic wielding Black Raven himself to the ninja like Japanese pirates. This film doesn’t do pirates versus ninja; it gives us pirates that are ninja! We also follow the efforts of a small village – the same people who rescued the cannon apprentice and baby from the sea – as they use guerrilla tactics to fight back against the pirates that have been terrorising them.

These two strands then weave together and the film gets into gear. There’s the whole issue of good guy Pari learning to master the Dim Lum for extra kicker. Get these; Dim Lum has a light side and a dark side. The dark side tries to seduce those who learn the arts and uses negative emotions like hate and fear for its power.

It’s an effective plot. It may seem complex at the first blush but the film executes it perfectly and it feels simple.

The other great thing about the plot is that it does not get in the way of martial art action. There’s enough fighting to keep anyone who bought Pirates of Langkasuka as an action film will be happy.

There’s a good degree of special effects in the Pirates of Langkasuka when it comes to the underwater scenes and the Dim Lum magic. Dim Lum is connected to the seas and the fish therein. There are some lovely scenes in Langkasuka which feature our heroes riding on the backs of giant manta rays or whales being used to drag tactically important ships into place for the siege.

All in all I’m happy to recommend Pirates of Langkasuka (or whichever name you want to use for it). I’m a fan of old dubbed martial arts movies and I’ve soft spot for cheesy fantasy films. Pirates of Langkasuka is both and neither – it’s not dubbed and it’s not that cheesy, bit nevertheless it seems to be the natural and successful amalgamation of them both.

time to read: 3 min
TV Falling Skies trailer
TV Doctor Who season 6 trailer
💰 Copper Coins 💰 Geek Native is an affiliate and may earn commission on purchases you make from third-party sites.
🍪 Privacy & Cookies 🍪 The site uses cookies to survive. By accessing the site, you agree to use your browser to control cookie use or take 1d4-3 privacy damage (tracking). If you defeat cookies via ad blocking, please consider the Patreon. An intro to cookies, and how to control them, can be found here. I Manage Cookies