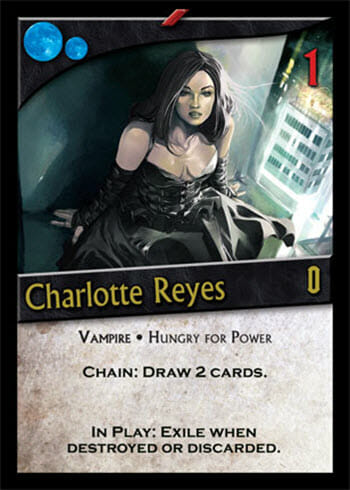 Last night was not only a lunar eclipse for some parts of the world but the longest night. I’ve been told that that’s the first time that’s happened in 400 years.

The clever folk at AEG have picked up on this and are using it an excuse to preview some of the art and card design for their forthcoming Nightfall game.

The card, illustrated by Daniel Vendrell Oduber, shows Charlotte Reyes the vampire. In Nightfall the creatures of the night are now battling for control of Earth. Cards have a colour and a linker colour. These are matched up to build chains and chains allow more cards to be played.

Charlotte Reyes is a vampire Nightfall players will get to know well. She’s one of the starting deck of cards. Players get 12 cards to begin with; 2 of each of the 6 minions which is one for each colour.

Notice how Charlotte’s In Play effect says “Exiled when destroyed or discarded”? This means the card is removed from the game, thinning your deck of these starting cards, while you build your functioning deck from the cards you buy. 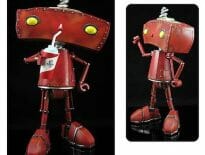