This review of Edinburgh RPG convention was first posted in 2003.

A good start is vital. Pick the weekend before St. Patrick’s Day, secure a student union where booze is already incredibly cheap and hold the convention there. Do this in Scotland and be sure to invite lots of Irish gamers too. Oh I know.

A full-page story on the back page of the local newspaper writing up roleplaying and war-gaming as a good and popular thing would be a help too. Conpulsion was lucky enough to be blessed with such a rare newspaper article and that explains why the World’s Smallest Roleplaying Convention was surprisingly popular. Many of us there didn’t even know about the article until the convention’s LARP organiser brought a bag of newspapers in for evidence. A copy of newspaper later sold for £40 at the charity auction. I think that’s a good start. Don’t you?

I spent Saturday morning browsing through the many traders and trying not to buy too much. There was a good representation of RPG shops among the stalls, people from all over the country who’d packed books into boxes and brought them up to sell. The traders had plenty to say about d20, ranging from “It’s a plague!” to “Urg!” and back to “It’s a plague!” again. That’s right. They’re not happy. Not happy with the sheer number of new d20 books and with the lack of quality control. I agree with the sheer numbers but it’s pretty rare to find a truly awful d20 book (with many of the worse offenders coming from WotC themselves). The local store has the policy of moving all third party d20 books from the New Release shelf once they’ve been out for a week and putting them straight into the bargain sales bin. They just won’t sell. I benefited from this and picked up some super deals. Goodie. It was White Wolf and Deadlands that dominated the second hand deals though, its almost as if the whole country as grown fed up of the pair of them at the same time.

I picked up other disturbing news too. Dodgy deals from one of the UK distributors. There are allegations from (most) of the traders that a certain distributor is allowing people to bypass the shops and buy directly from them. The gamers doing this will get their books more cheaply but it means the RPG shops will go out of business. That’s bad. The villainous distributor in question seems more than happy to cut the shops (the middle men) out and deal straight with customers but fortunately the others are playing ball, as they should be. This is all hearsay but still pretty good convention gossip!

At lunch I caught a couple of girls reading through the Slayer’s Guide to Female Gamers. I just had to ask what they thought of the book. They liked it. They didn’t find it offensive or insulting at all. I double-checked that they stood by that opinion and with mock seriousness they changed their minds and pretended to be affronted by the terrible representation of female gamers in the book.

Teviot Union is an interesting place. It’s an old gothic style building that’s part of Edinburgh University. It’s deceptive. The place is a maze and rather Tardis like. As you wander into the convention you’d be forgiven for believing that there was only a few dozen people in attendance but if you start to explore, as I did, you’ll find large rooms full of MechWarriors, CCG battles, loud RPGs and LARPS. Although this can lead to a slightly cliquey convention it means the LARPS can have large areas to themselves and when a big event like the charity auction needs to be held, it can be held.

The auction raised thousands for charity. It always runs hours late, always and yet remains popular nonetheless. No one would bid for a copy of the Player’s Handbook so they auctioned the plastic wrapper it had come in and included the book for free – that raised £20. Heroes Unlimited went for £20 too and that provoked much hair-tearing and anguish from the RPG shop owners because they’ve been unable to give the book away for years. There was controversy when no one would bid for Vampire: the Masquerade and someone started a “Burn the book” fund. They raised £26 to have the book ritually burned but a counter bid, rallied by the Irish, hit £30. The book was saved and charity won. The biggest single hit was a combined bid for over £600 to see various shop owners and special guests shave their beards off.

The mist was heavy in the morning. This was due to the anti-cyclone sitting over Scotland; it’s great when the weather cooperates. If you want to pick a cool location for roleplaying then I think you might well come up with a mist shrouded, gothic building in the heart of Scotland. In the basement some of the war-gamers were re-creating the sixteenth engagement of Waterloo where a unit of the Blackwatch Highlanders marched under Prince of Orange’s command to join with Wellington’s cores. Up in the pub there was an actual Blackwatch sabre on the wall.

I brought my dinky little digital camera along. It failed to take pictures of most of the games, stalls and displays because it was too dark but a few from outside and from the especially well lit areas survived. You can see Andy the Orc modelling for Edinburgh’s Fools and Heroes LARP.

Sunday’s highlight for me (and everyone else involved) was a chance to play in The City. The City is the setting for Contested Ground’s a/state gritty sci-fi RPG. This was a special treat since the GM was none other than the game’s creator Malcolm Craig. Never heard of a/state? That’s not too surprising. Although a/state lite is available already the hardback complete edition is not yet printed. Those who know about it are chomping at the bit to get at it. A laser printed copy of one draft of the rules went at the charity auction for over £100 and so did a collection of the game’s artwork.

The World’s Smallest Convention did pretty well for special guest artists all around. I knew I wouldn’t be able to flick through April Lee, Colin MacNeil or Andy Hepworth collections very often without succumbing to the temptation to spend a fortune on a signed print or original.

The big surprise on Sunday, for me at least, was the purchasing of a copy of the Advanced Warriors DVD. It’s an interactive movie, it’s like a visual Fighting Fantasy book and I’m reassured it’s nothing like Seven Swords of Wayland. Advanced Warriors has an impressive cast; Chase Masterson from Deep Space 9, Jeremy Bullock from Return of the Jedi and Empire Strikes Back (he wears a spooky hood in this too… oh, I’ve given it away), John Carrigan from the Chronicles of Narnia and Rebecca Nichols from The Bill.

After playing in a Changeling LARP for a few hours I caught up with Malcolm Craig (Contested Ground Studios) in the pub upstairs and chatted a bit about a/state. It’ll be a game without a driving plot line – that’ll be up to the GM, supplements definitely won’t succumb to the Big Gun syndrome, supplements may mention key NPCs but won’t stat them – that’ll be up to the GM and in fact if plans go accordingly a/state will see some of the best value for money colour supplements in the industry.

"The same thing we do every night, Pinky - try to take over the world!"
The Lost Archives 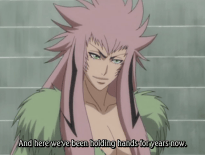