Many EVE Online players will find that they can’t get hold of their money. I’m not an EVE player but I know it for two reasons; a) the White Wolf merger and b) the economy.

The economy in EVE Online works well. You see; in a fantasy MMO players are forever running around in dungeons and finding gold. This gold is spent on fancy armour and weapons. Players find more gold and upgrade their gear. The result is hyper inflation. The money never goes away. More money simply comes in.

This isn’t the case in EVE. In Eve spaceships burn money and battles which result in ships blasting holes in one another are very expensive. So although the game generates cash it also consumes cash.

CCP Games, who run EVE Online, give their players the run of the game for all financial ventures. They offer no support other than an API.

So EBANK was created by players, invested in by players and built up their brand and wealth through in-game successes.

EBANK’s first body blow – perhaps the one they’ll never recover from – happened in June. The game’s in character CEO “Ricdic” embezzled over 200 billion ISK. The result was a run on the bank as other players rushed to withdraw their in-game cash.

I’m told that it was looking like the bank was recovering so I imagine this comes as a nasty surprise. EBANK has frozen everyone’s accounts. 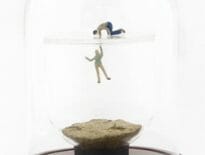