You are here: Home / Books / The Strange Affair of Spring-Heeled Jack 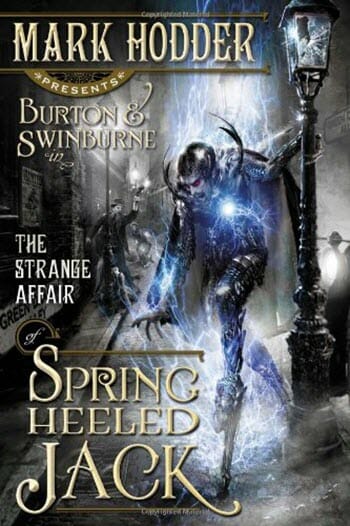 Mark Hodder’s debut novel is a Victorian steampunk history mashup. I’m always slightly cautious of historical mashups; surely real life heroes can’t be as interesting as fictional ones or what if you don’t like the treatment someone is given?

At a glance The Strange Affair of Spring-Heeled Jack is taking a risk. Just look at all the “people from history” Hodder weaves into his tale; there’s Spring-Heeled Jack himself, Sir Richard Francis Burton, Algernon Charles Swinburne, John Hanning Speke, Oscar Wilde, Laurance Oliphant, Richard Monckton Milnes, Isambard Kingdom Brunel, Lord Palmerston, Paul Gustave Dore, Florence Nightingale, Burke and Hare, and Henry de La Poer. Some of these are significant characters and some of them make cameo appearances. The two of note are Francis Burton and Swinburne. The unlikely pair are our heroes.

Complex is a good word for Mark Hodder’s mystery. It’ll become quickly evident to the reader why the mysteries in the Strange Affair of Spring-Heeled Jack are just so hard for the heroes to unravel. I’m going to skirt those details in this review, for fear of spoilers, but I will say that Hodder does a good job at ensuring there are mysteries for the reader to work out. That’s a nice juxtaposition to the central mystery which most readers will clock to quickly.

Burton and Swinburne are an odd choice of heroes. The lead character is certainly Francis Burton, Swinburne tags along and its almost surprising to the see space on the book’s cover proclaiming; “Snowbooks proudly presents Burton & Swinburne in…”. I can only imagine there’s hope for more to come and for Swinburne to step up in significance.

Snowbound is worth a little note too. There seem to be two version of the book. One published by Snowbound and the later copy published by Pyr. I read the Snowbound version. Not sure why there was a change of publisher but it would be nice to find out.

The real life Burton often wrote about sex. He’s responsible for having the Karma Sutra published in English (yes, there are words) and during the diplomatic stage of his professional life he would explore the world, take notes on local sexual customs and even measure the length of male sexual organs around the world.

There’s not much sign of this Burton in the Strange Affair of Spring-Heeled Jack and yet there is much time given to the conflict between the Libertarian group of influencers in London, who would no doubt approve, and the Technologists.

The Technologists provide so much of the book’s charm. We have genetically modified greyhounds that carry paperwork, giant horses designed to pull incredible weights, huge crabs that pick up rubbish and even cats that use their own fur to clean houses before licking themselves clean. The best, however, by a long shot are the parakeets that are genetically changed to be voice messengers but which inexplicably splice insults and rude words into the messages they carry.

It isn’t just with swearing parakeets that the Technologists of Mark Hodder’s imagination colour the alternative steampunk London – it’s with their technology too. Hodder manages to capture the gritty side of steampunk as his vehicles, sometimes dangerous, contribute heavily to the incredibly awful pollution in London. For much of the book, London is almost held hostage by a curtain of soot that makes land based travel almost impossible.

I picked up the Strange Affair of Spring-Heeled Jack while I was in the bookshop. The impulse purchase has proven to be a hit. I rather enjoyed it although it took me a little while to get used to Hodder’s writing style.

I think it’s Snowbooks and it’s very common for a small independent publisher to sell the US and Foreign Rights to a larger publisher – that explains why a number of Snowbooks titles appear in North America with different cover art.

I see. That makes a lot of sense… so because the book’s done well, it’s been “upsold” to a larger house who’ll take care of the US market.

That’s right – it’s in a small publisher like Snowbook’s interest to sell the US and Foreign rights to a title as they don’t have the financial capacity or distribution that larger publishers do. Steampunk is all the rage right now, Snowbooks also sold George Mann’s steampunk books “The Affinity Bridge”, “The Osiris Ritual” and “Ghost of Manhattan” to US interests. What I find amazing is the contrast in the cover art.

I think the Pyr cover on Spring-Heeled Jack is much better. Much more action based – and less focus on the two British historical characters. I can see why they made the swap.

The Strange Affair of Spring-Heeled Jack 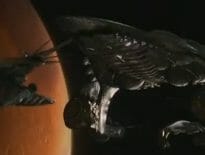 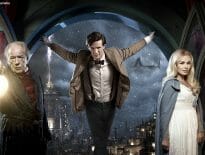