You are here: Home / Geek Stuff / I’m Gandalf and Magneto. Get Over It.

Back in the day I was a Wizard on some MUSHes. A wizard wasn’t a powerful character. It was a coveted but unloved admin role that spent a lot of time saying “no” to people’s over powerful character creation attempts.

“This is a grim and gritty crime fighting MUSH. There are no super powers. There are bloody knuckle dusters. You can not play Magneto.”

There’s always one, though, always someone who can come up with a good reason why they could – and should – play a character as outrageous as Gandalf and Magneto combined. 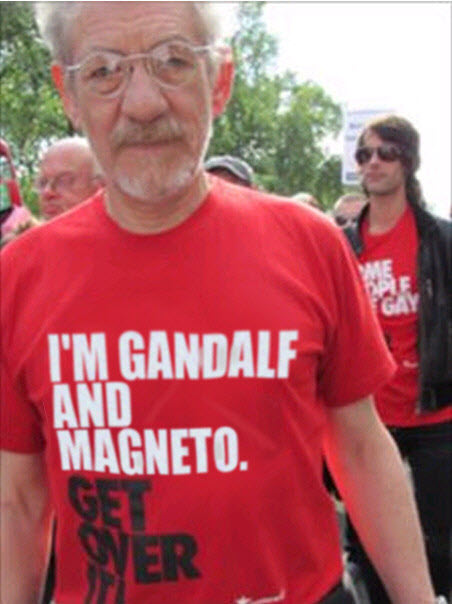 Of course, this is Sir Ian McKellen. He’s quite right. He is Gandalf. He is also Magneto.

Respect to the t-shirt dude, respect. You win. I’ll get over it!

Update: Noooo. It’s shopped. Here’s the original from the BBC. So much for putting the Gandalf versus Pope approach. 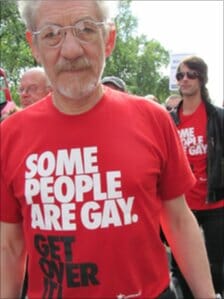 I’m Gandalf and Magneto. Get Over It.

time to read: 1 min
Cool Tech LEGO Tardis is awesome (via @JustJon)
Geek Stuff Super Shogun Stormtrooper
💰 Copper Coins 💰 Geek Native is an affiliate and may earn commission on purchases you make from third-party sites.
🍪 Privacy & Cookies 🍪 The site uses cookies to survive. By accessing the site, you agree to use your browser to control cookie use or take 1d4-3 privacy damage (tracking). If you defeat cookies via ad blocking, please consider the Patreon. An intro to cookies, and how to control them, can be found here. I Manage Cookies