Brushfire is a miniature war game from On the Lamb games. I had my copy sent to work – a digital marketing agency – and handed it to a colleague sitting near me and explained I’d be writing a review of it. Captain Caveman, as we affectionately call his colleague, isn’t a gamer but he’s a well-read fellow. I was curious to know what he would make of the game.

I think Captain Caveman was half right. On the Lamb games have done their research but Brushfire shouldn’t be a nightmare to review. It’s been a long time since I played Warhammer Fantasy Battles but this brought it all back. Except, well, it seemed after just one reading of Brushfire that authors Emily Fontana, Matthew Whitehouse and Pedro Panzardi had managed to avoid many of the problems that the old battle games fell into. Brushfire, for example, seems to be more about skirmishes or reasonable sized battles rather than spending a fortune on enough troops to make the battlefield look impressive.

Except; I shouldn’t really use the phrase “last man standing” with Brushfire. A significant part of the game’s charm is its anthropomorphic troops and setting. That’s right; fighting furries! Except Brushfire has more of a historical feel to it than the high fantasy escapism of your average furry RPG. In fact, it’s fair to describe the Brushfire as an alternative Earth. It’s not just there is a faction of burrowing mammals to fight or fight with – these are Napoleonic burrowing mammals. The first effective Emperor of Aquitar was Moleon II. 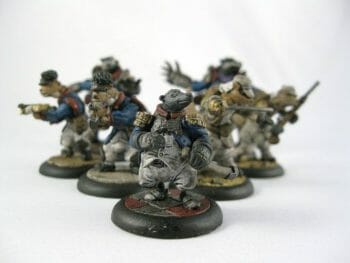 There’s more than burrowing mammals as there’s a whole zoology across the eight factions. The Empire of Aquitar, The Commonwealth of Axony, The Kingdoms of Chugoku, The Free Cities of Mare-Civitas, The Shogunate of Ribenguo, The Scyzantine Empire, The Vandalands and The Tribes of Zabar are home to everything from fighting dogs, to mouse conquistadors and – my favourite – siege tortoises.

Sieges – yup – there’s a chapter on that too. Brushfire is a 246 paged book too. It’s not a large, heavy, A4 hardback either. What this means is you might lack a mighty tome to slap down on the battlefield table, you might lack the gloss and colour of some modern games and you might suspect that On the Lamb isn’t a large company with money to throw at expensive print runs. This also means that in the 246 book, you get cleverly written text, nice and compact, far reaching, thought out and for less than $30 as well. You can even buy direct from On the Lamb and support indie gaming.

In fact, I feel as I’ve barely scratched what it’s in the book – a good sign that it’s not short of everything. You’ve unit types, formations, terrain and reserves each with a chapter to themselves. Let’s not forget the basic rule either. Brushfire uses phases. We’ve the Squad Phase, Movement Phase, Tactical & Heroic Phase, Ranged Phase, Charge Phase & Reactions, Melee Phase and Results Phase. I’m no war gamer but I found I picked it up easily.

I think Brushfire also deserves a mention for its use of heroes and generals. I’m an RPGer at heart rather than a war gamer; so even though I get really into the tactics and the strategy – I often like to personalise armies though key characters. That’s what I get to do in a game effecting way with heroes and generals. These characters also get to level up and therefore bring that extra level to the campaign option. 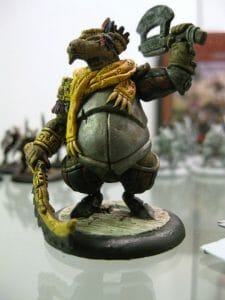 All in all; I thoroughly enjoyed Brushfire. It’s easy to read and seems fun. Not sure how often I’m going to pluck it from the shelves and suggest we make do with paper minis (On the Lamb do make official miniatures for the game… ouch, business plan hardship) and play with friends but I’ll recommend it to war gaming friends.

One important disclosure; I didn’t pay for Brushfire as this is a review copy.

I didn’t approach On the Lamb and nor did On the Lamb approach me. A Geek Native reader, in fact, suggested that I might be interested in the game so I suggested he drop an email to On the Lamb. Turns out he took me up on my offer and some time later On the Lamb got in touch.

They supplied the game knowing I wasn’t much of a war gamer and would rubbish the game if I didn’t like it. On the Lamb didn’t even flinch. I suspect they know they’ve a game to be proud of here.

Geek Stuff Chillin’ Chewbacca
💰 Copper Coins 💰 Geek Native is an affiliate and may earn commission on purchases you make from third-party sites.
🍪 Privacy & Cookies 🍪 The site uses cookies to survive. By accessing the site, you agree to use your browser to control cookie use or take 1d4-3 privacy damage (tracking). If you defeat cookies via ad blocking, please consider the Patreon. An intro to cookies, and how to control them, can be found here. I Manage Cookies