You are here: Home / Books / Comics / Spoiler Alert! – A Musical Tribute To The Justice League International

Ever since I began my comic collecting in the late 80s, I’ve had a weakness for the Justice League International. It seems I’m not the only one, since UK Indie band Spoiler Alert! have just released an E.P. containing songs about three of their members: Batman, Blue Beetle and Booster Gold. 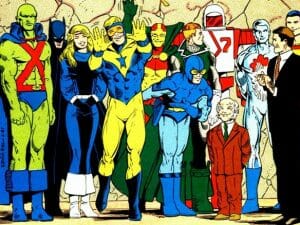 (The JLI: Blue Beetle’s the one bowing, Booster Gold’s the guy in Blue and erm Gold, and Batman’s the one who is Batman.)

The music is a mix of relatively monotone British Vocals, lo-fi Keyboards and grimy guitars, but what’s pretty cool is the level of detail they go into. The Booster Gold track is the stand-out, being at once pretty catchy and an excellent potted history of the character. According to the interview on Comics Alliance, this EP is supposed to be the first part of a series covering the entire League. I personally can’t wait for the Guy Gardner and Rocket Red songs!

If you’re interested, check out their artist page at Corporate Records. The E.P.’s on a Pay-As-Much-As-You-Like deal, with a recommended price of £2. That won’t even get you a pint in a Dundee pub!

Spoiler Alert! – A Musical Tribute To The Justice League International