Ratalaika Games’ Caffeine: Victoria’s Legacy is a visual novel. It’s a graphic novel for your Switch, PS or Xbox. I think it’ll work best on a Switch when you’re stuck on a bus, too tired to play a game, but too restless to turn pages or sleep.

If you’re unfamiliar with the style, imagine seeing a static image, like a graphic novel background, overlayed with one or two characters that are sometimes lightly animated while bite-sized bits of text flow past.

I don’t think it’s right to call visual novels or Caffeine: Victoria’s Legacy a choose-your-own-adventure, but sometimes you get to select responses that nudges the storyline.

Is Caffeine any good?

In Victoria’s Legacy, caffeine is so good it’s magical.

Is the visual novel Caffeine: Victoria’s Legacy any good? I enjoyed the opening chapters but haven’t finished the story, and I suspect I won’t. My hunch is that next week will keep me busy, then something else will distract me, and while I enjoyed a weekend in Victoria, it won’t surface at the top of my to-do pile again.

Mind you, I was watching/reading from my sofa, and on my dusty Xbox One S. That’s the same sofa I could be watching Cyberpunk: Edgerunners, She-Hulk, Rings of Power or Andor from.

If I had a Switch and travelled, I think it would be a different story. Victoria’s Legacy would have been a great companion to Tabletop Gaming Live in Manchester a fortnight ago. I would have taken the combo to Glasgow this week for my overnight stay.

You start the story as a young engineer on a flight to look for his runaway dad. A young woman gives you an amazing cup of coffee and is then implicated in bringing the plane down (a coffee terrorist?) with an explosion.

You survive and wake up in an alternative reality in which coffee is magic. Yes, there’s this expected bit where frustratingly, your character struggles to accept this and then, once he does, decides not to communicate anything intelligent to anyone.

Instead, you’re roped into keeping a coffee shop (your dad’s, as it happens) afloat.

As is the way of these things, Victoria’s Legacy is a romance and those choices you get steer you through four romance options.

Expect all the anime tropes and tricks, including faceplanting into a woman’s chest, breaking the fourth wall and duels.

The art gets repetitive, but this is often the case in this game style. I’m far from an expert, having played through/read through barely half a dozen, and I think Victoria’s Legacy is pretty good. Yes, there’s a repetition of art and scenes but it’s not as bad or as common as some of the leading books in the field.

Ratalaika says there are some 450,000 words in the story in total.

There’s also partial voice acting which means key scenes are spoken, but much of the game is not. Again, that might sound weak, but it’s pretty good for the genre.

I don’t think there are ‘tips’ in the gameplay tips for Caffeine, certainly none that I found. You can be a jerk if you want, helpful, pushover, or somewhere in between. It’s relatively evident which narrative choices lead you towards which of the many young women you’ll encounter (and you’re always playing as a bloke).

However, there are some tips that I think make the game better. Open up the settings and increase the speed of the text and auto-next. Both are set pretty slow to start with, and speeding them up makes a positive difference.

I enjoyed it, but I’m sure I didn’t get €18 worth of gameplay/reading from the title. If I stick with it and return to explore beyond the opening chapters, I’m confident that €18 is there.

If you already know you like visual novels, then, yeah, give Caffeine a go. My hunch is that it’s a robust performer.

If you’re uncertain but curious, I also think you should give it a go if you can afford to write that €18 or $18 off.

I don’t think this graphic novel will change your mind or win you around if you’re doubtful. I think your mind will wander.

Disclosure: My copy of Caffeine: Victoria’s Legacy was provided free to review. 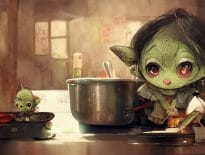