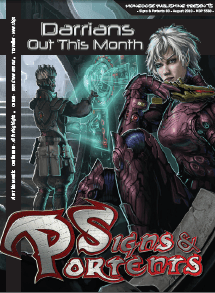 The Mongoose team have found time to upload and begin giving away the latest edition of the free to download magazine “Signs and Portents”.

This is really a pre-GenCon edition in many ways but there’s enough here to ensure that most Mongoose gaming groups find something to their taste.

RuneQuest
The Dragon of Naseby, a Clockwork & Chivalry scenario.

Traveller
A veritable fleet of new ships for Traveller.

RuneQuest
A second scenario this month for RuneQuest fans, exploring ruins in a side quest.

Corporation
A look at the Tartarus ultramax security prison.

After this iPaper version – which you can read online or download – there’s a snippet intro into their RunQuest adventure “A Dogs Life”.

When the Adventurers discover the ruins of an ancient arcane academy, they find themselves the subjects of a gruelling magical test that has lain dormant for hundreds of years.

This brief RuneQuest scenario is a perfect ‘filler’ and can be used any time a group of Adventurers is wandering through an out-of-the-way region – perhaps during part of an ongoing campaign. Due to its unusual nature, it can be used with characters of any experience level and is perhaps a perfect remedy for players who have come to rely too heavily on the impressive abilities of their characters. More than that, it serves to remind players that, above all, roleplaying should not be taken too seriously!

Centuries ago, a cadre of well-meaning sorcerers opened a school to teach magic to the next generation of spell users. For a time, they prospered and several notable sorcerers graduated from the academy. Unfortunately, a series of misfortunes befell the college and proved too much for the wizards and novices to withstand. Local legends still talk of a mysterious army of aquatic monsters that slithered up out of a nearby lake and attacked the institution. Many locals, who blamed the sorcerers for the creation of these strange monsters, raised a militia and assaulted the school. Finally, several magical experiments went awry, destroying many of the buildings within the academy. In less than a year, the school went from a prospering institution to a derelict ruin.

In their haste to leave, the sorcerers did not remove all of the enchantments that had been cast in and around the grounds. One particular enchantment, designed to test the intellect and ingenuity of senior students, has remained in place across all these years – as the Adventurers are about to find out…

Whilst travelling through a lonely region, the Adventurers come across an intriguing ruin. Read or paraphrase the following:

The ruins before you are scattered over a large enough area to indicate that they were once part of a large building – or even a collection of such. The skeleton of a narrow tower reaches skywards, a spiral stair visible within its exposed innards. A long, ragged wall marks out what may once have been a gatehouse.

This tranquil scene is disturbed by a series of snarls and howls that rend the air. Moments later, a pack of vicious-looking wild dogs bounds from the ruins and race towards you.

There are as many wild dogs as there are Adventurers and the feral curs attack the party with terrifying ferocity, scattering only when more than half their number is slain.

This opening fight should provide the PCs with an opportunity to limber up and flex their muscles. Dealing with the pack should be relatively easy and will encourage the PCs to feel over-confident as they move in to explore the ruins.

Once the Fight ensues, the PCs will catch glimpses of a large hound moving stealthily through the ruins. This Alpha-Male will remain at a safe distance; once the fight has turned against his pack, he hurries away, retreating down a ruined stairwell. 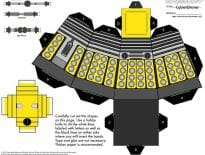