You are here: Home / Geek Stuff / Familiar Dice Trays: Cute (even the dragon) and useful (even the cat)

Mythical Studios have an Etsy store, which means public reviews and ratings. They score well! And so, I’m not only bookmarking them but digging into the Familiar Dice Trays Kickstarter.

The project has been funded, and, in part, this is because we’re not getting cute 3d printed dice trays. We’re getting more traditionally designed and cleverly engineered tabletop decorations. You can see what I mean or just pledge, from the pitch page.

If everything unlocks, there will be 15 different designs, and we’ll list those later. First up, though, let’s highlight some features. There are the zip compartment heads to store dice or minis in and those clever inner rings which can widen the dice tray or be used as another storage area.

The Familiar Dice Trays are made from vegan “leather” and cotton. The main tray is about 8 inches, the depth 2.5 and the head 4 by 3.

Mythical Studios opened for business on Etsy in November 2017, and since then it has evolved and changed massively. Going from hand drawn paintings to props, enamel pins, prints, bags and much more! Our reviews are amazing and as you can see we work hard to go the extra mile for each and every customer. Providing beautiful, top quality merch and art.

Supporters who find £30 to support the project get a dice tray. You’ll be able to buy them later, but they’ll be more expensive. There’s also a sticker sheet and badge pack at this tier.

Additionally, at £150, you can start to upgrade some of your many dice trays to bags. Then, at even levels, you also get enamel pins added in.

No matter which tier you support, the estimated delivery of the dice trays familiars is December this year.

Familiar Dice Trays: Cute (even the dragon) and useful (even the cat) 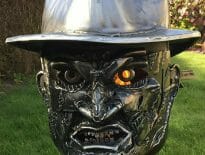