A descent into insanity is the perfect topic for any friendly game night. Seances aren’t as big as they used to be, but games inspired by Lovecraftian fiction are pretty damn popular.

If you’re done with Monopoly and Uno, cue your darkest dungeon-based soundtrack for a look into the abyss.

Here are 9 of the best tabletop games inspired by Lovecraft’s Cthulhu Mythos.

Arkham Horror was first released in 1987. Later editions of the game are published by Fantasy Flight Games. It’s meant to be played by 1 to 6 players as a turn-based adventure into the world of cultists and Cthulhu.

Players choose from 12 possible investigators at the start. Moves are made to stop the Ancient Ones from taking root.

As far as Cthulhu-themed games go, this is one of the most popular ones: if you’ve never played Arkham Horror before, just imagine what it would be like to play Macabre Monopoly.

Pandemic is a franchise released by Z-Man Games, meant for up to 4 players. The same series has other titles with similar gameplay and other themes, including Rising Tide and Fall of Rome.

Pandemic: Reign of Cthulhu uses the angle of players tasked with sealing the four gates. Players’ moves don’t stop viruses in this version but slow the spread of dark influences to other areas. The game is map-based, and players defend the gates in four different cities on the board.

The game makes the most of its source material, setting gameplay in the 1920s overrun by the weird occult.

Cthulhu Gloom is another Lovecraftian adaptation of a classic card-based title.

Its original game is just known as Gloom, released by Atlas Games and recommended for 2 to 4 players. Instead of the happier gaming goals like getting points or reaching the end, the point of Gloom is to bestow as much as possible misery upon your fellow players using the appropriate cards.

Story and Transformation cards make the situation at-play either better, or much worse.

Gameplay goes from start to finish in under an hour. Cthulhu Gloom has a dark, cartoon-violence edge to it which most fans of Lovecraft should, well, love.

Mansions of Madness is another darker title by Fantasy Flight Games, who seem to be serious fans of the Lovecraftian tabletop game themselves. It’s recommended for 1 to 5 players, just like the average seance.

The game is far more RPG-based than other games, with character and players traits able to change as the game continues. It’s not a quick play, and the game makes for a longer setup than most standard Monopoly players will be used to.

The game is played with 32 figurines that move around the board. D&D fans should feel right at home with this game, with the Keeper taking score. The game gets played much like a Campaign, with gameplay matching to different Lovecraftian storylines.

There’s one more difference: Mansions of Madness can be played with an accompanying app that takes over the role of the Keeper.

The game can be expansion heaven – or hell, depending on how players feel about it. Additions include Horrific Journeys, Streets of Arkham, and Sanctum of Twilight.

Steve Jackson Games is notorious for being mistaken as a cult themselves by the FBI, who proceeded to seize copies and notes on Illuminati: The Board Game. It’s only appropriate that one of their best-selling games would be Cthulhu Dice.

Cthulhu Dice is a simple play, with each round lasting 10 to 15 minutes. Conversation, snacks, and bathroom breaks can extend this.

Players get a singular dice, and Cthulhu dice involves the use of 3 Sanity tokens – and great for the theme, curse-casting. It’s like playing Yahtzee with the addition of insanity.

Steve Jackson Games seems to like digging into the Cthulhu Mythos just as much as Fantasy Flight. Here’s another Cthulhu-themed game from SJG that plays on the original Munchkin card game.

The description lists it as perfect for 3 to 8 players. Munchkin is turn-based and card-centered. Strong role-playing aspects are introduced with several character classes that include Cultists – an essential Lovecraftian element.

It’s one of the more cartoon-style horror games, but completely worth it for anyone who loves the character creativity of your average TCG.

Don’t Mess with Cthulhu is from a smaller gaming publisher known as Indie Boards & Cards. It advertises itself as a deduction-style board game, which puts it in the same class as Cluedo and other investigative titles.

Players are issued their roles at the beginning of the game. Players take part as investigators or cult members, trying to stop (or bring about) the apocalypse.

Mix adventure games like CSI: Crime Scene Investigation with Cluedo, and this is what you might get. How hard it gets to play (and how long the game might take) depends on who you’re playing it with.

Love Letter is a game that some players will be well familiar with. The goal of Love Letter is to ensure the delivery of an important letter from one side to the next – and all game-actions will either help the player, or slow the process just a little.

Traditional games of Love Letter uses cards like Guards, Priests, and Handmaidens. Lovecraft Letter borrows from the traditional rules and style, but replaces the usual cards with different options like The Necronomicon and Cats of Ulthar.

Cards are, according to the description, tarot-sized – and the art reminds you just enough of tarot decks.

Games are quick enough (approximately 10 to 15 minutes), and recommended for 2 to 4 players. Candles and an altar are optional.

Cthulhu Wars: Duels is a smaller, more portable version of Cthulhu Wars by Petersen Games. In a way, it’s like the condensed Reader’s Digest version of the larger game: entirely standalone, with some details shortened.

It’s a blend of cards, tokens, and role-playing attributes in the same game. For fans of duel-style TCG games, it’s right up your darkest alley.

Players assume the role of either Cthulhu, or The Black Goat. No sacrifices necessary to win. Have fun!

Author Bio:
Alex J. Coyne is a journalist, writer, and regular seat-filler at various tabletop games. He has written for CollegeHumor, Great Bridge Links, Funds for Writers, Bridge Base Online, and more. His website is the best place to find him for samples, writing projects, and more. 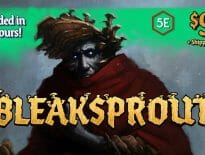 Tabletop & RPGs Honey, I shrunk the heroes: The fungal peculiarity… 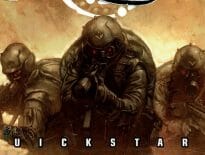