You are here: Home / Games / Tabletop & RPGs / Free to Download: At One With Nature a 1920s Call of Cthulhu horror

A Miskatonic Repository book, At One With Nature, is a 1920s Call of Cthulhu horror from Graham James, with potentially no combat.

This is a light review of a pre-written scenario and therefore contains spoilers. If you’re not a Keeper, then step through this portal to be whisked to a random, but probably not this, Call of Cthulhu post instead.

If you’re still reading, then you’re a Call of Cthulhu Keeper and don’t mind giving your players weighty choices.

There is no good outcome in At One With Nature. If the characters make it to the dramatic final scene, they either doom a town or a relative.

I liked the adventure a lot. I must be mean.

The download is a Pay What You Want with a suggested price of $0.00. I didn’t pay much as I had been told that despite a few text handouts in the back (there are) that there was no art (there is not), and the layout was pretty simple (true). However, that undersells the thoughtfulness of this horror. It’s good. It’s worth, on reflection, a couple of bucks.

Graham James suggests the game suits two to three players and the Keeper. I think it’s much better with two players. These two characters are ideally newlywed and taking a honeymoon to 1920s Scotland, stopping off at Nachairey Castle to visit a sister. Agatha, the sister, is also relatively newly married and to the lord of the castle Alistair MacNain.

The problem? By the time the PCs get to Nachairey Castle, Agatha has been missing for two days.

At One With Nature’s structure

There are no maps or even follow of events. There’s nothing linear here, no character art and hardly any stats.

Instead, the adventure begins by introducing the NPCs. Each key NPC gets only a few lines, but it’s enough to describe what they know about Agatha’s disappearance and how Keepers should handle the character.

Nicely, we’re even given roleplaying tips for the NPCs and producer notes. For example, while playing Alistair MacNairn, it’s suggested we keep looking away as if distracted. Mention, also, he has a drink in his hands.

It’s vital to nail these NPCs. Imagine the films Knives Out or Werewolves Within without such strong characters. It simply wouldn’t work.

After the NPCs come the scenes. I won’t go through them all, but they start;

For each scene, we’re given snippets that tie together. For example;

He is aware of the memorial service being planned (Clue G). He will not volunteer this fact. He says he is following the laird’s wishes in the matter (not true, actually it is MacDonald’s idea, see Scene 08).

It’s not quite a choose your own adventure as, while there’s no linear set of events here, there is momentum. New scenes effectively come into play as and when the players figure things out and make progress.

Listed clues make it clear to the Keeper what they need to hint at the players. Clues are the seeds that need to be sown. But, are they enough?

As much as I liked the adventure, the mystery, there are many players I wouldn’t try this with. I don’t think progress is inevitable at all. I worry that some groups, especially ones not used to being proactive detectives, will flounder.

Furthermore, I think it’s quite hard to help the PCs out without Miss Marple turning up. If the PCs do get stuck, then I think the game might start to drag. We can’t even have the lurking horror rise up and eat them all, not unless something dramatic happens.

Despite the potential problem of the players getting stuck or simply not being driven enough to get into the mystery, I think At One With Nature is worth your time.

I don’t want to say, “The recommended price is $0.00, so what’s the worst that can happen?” because I think it’s worth a few bucks.

The adventure is a pretty interesting showcase for Call of Cthulhu. This is very clearly not D&D set in the 1920s and without halflings. The tone is so incredibly different.

Free to Download: At One With Nature a 1920s Call of Cthulhu horror 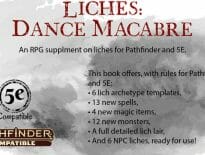 Tabletop & RPGs Looking for a big baddie for your RPG? Liches: Dan… 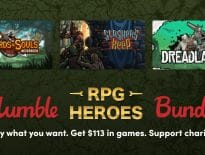