The winner of the Geek Native’s Patrons RPG Publisher Spotlight this month is Grognardia Games.

Every month this group of hardcore site supporters get to vote on a shortlist (and suggest candidates) for a creator or publisher to get some extra attention. You’ll see winners called out in the RPG news summaries of Routinely Itemised, mentioned on the podcast and in a permanent home on the Spotlight page.

Luckily, this month, James Maliszewski, the founder of Grognardia Games, agreed to participate in a Q&A. As we find out, James isn’t just the founder; he is Grognardia.

Both names may look familiar. You might know, or use, Grognards as a term if you’ve been on a scene for a little bit. As for James? A busy RPG Geek designer page doesn’t seem to do him justice. I believe he’s nearly worked the A to Z of publishers. Atlas to Wizards of the Coast (or White Wolf; for the A to W) are companies James has written for. His own About Me page is far too humble, noting merely that he started with D&D in 1979, and is still going.

An introduction to Grognardia Games

Grognardia is just me. I have a number of regular collaborators – mostly artists – with whom I undertake many of my projects, but, by and large, anything you see associated with the name Grognardia or Grognardia Games is written and produced by me.

Why did you decide to start a blog?

The main reason was that, from 2000 to 2007, I was heavily involved in playing and writing for Third Edition Dungeons & Dragons and the D20 system games that it inspired and influenced. Make no mistake: I had a lot of fun during those years and don’t regret the time I spent playing the game and writing for it. However, by the end of the period, it had become clear that the game’s rules were coming to dominate play to such an extent that I was tired out, both as a player and referee and as a writer. Furthermore, it was clear that D&D’s publisher, Wizards of the Coast, was planning to abandon Third Edition and take the game in a new direction, a direction that resulted in a game that I wasn’t at all interested in. With all this in mind, I began to look back on the games and editions I’d played earlier in my life, with an eye toward finding the things I loved about them years earlier. As I did so, I found myself writing lots of notes to myself, some of them quite long. I soon came to think it might be helpful to share these notes with other people through the medium of blogging. The rest is history.

How did you become a publisher?

By accident mostly. Prior to 2011, when I self-published the revision of my science fiction RPG, Thousand Suns, everything I’d written had been published by someone else. I’d never had any interest or inclination to be a publisher, because I thought I lacked the skills to do so. Turns out that’s not the case, thanks in large part to technology, which makes it a lot easier for one person or a small team of them to produce materials that, in the past, would have required a much larger number of people. Beyond that, I started to publish because I had ideas for projects that I wasn’t sure anyone else would want to take up or that I wasn’t sure they’d do the way I wanted them done. Over the years, I’ve had a lot of experiences with publishers who did things with projects that I didn’t like and I wanted to avoid that. The easiest way to do that was to publish it all myself.

How unusual was it to find other tabletop gamers in 1979?

For me, not very hard. I more or less “grew” my own gamers at the time. When I first picked up D&D, I immediately introduced it to my friends and we all played together without the need for anyone else. Mind you, this was also right around the time that D&D and RPGs more generally were becoming more well known. Book stores, game stores, even stationery and card stars were selling RPG products on their shelves and attracting players. There were also libraries hosting “game days” where they opened up meeting rooms for people to meet and play. I have no idea if my experiences were typical, but that’s what 1979 and the following years were like for me.

At the bottom of this spotlight, in the usual place, you’ll find links to eCommerce, blogs and James’ latest DriveThruRPG publications are also included. Not much in the way of social media, though.

Which games or supplements do you think you’re most well known for?

I suppose my name is usually associated with Dwimmermount, the megadungeon I ran in my home campaign between 2008 and 2011 and that was eventually published by Autarch. I’ve already mentioned my SF RPG, Thousand Suns. More recently, I’ve been publishing The Excellent Travelling Volume, a fanzine devoted to the fantasy setting of Tékumel. The first issue appeared in late 2015 and I just published the thirteenth in June of this year. Before all of these projects, I wrote too many things to list, going all the way back to the early 1990s, when I was heavily involved in writing for GDW’s Traveller RPG and White Wolf’s World of Darkness games.

What would you like to be most well known for?

I’d like to be known as a thoughtful, creative writer who made stuff that people had fun with.

Vaults of sha-Arthan is an online campaign that James runs and a setting he’s working on modelled on Jorune and Tekumel. You can find posts he’s written about it with this label search on the Grognardia blog.

What can you tell us about Vaults of sha-Arthan?

Not too much – yet! It’s a new fantasy setting I’m working on for a new campaign I hope to start refereeing later this year. I’ve described it as a weird science fantasy setting or a “secret science fiction” setting in that it’s ostensibly a fantasy setting with all the usual accoutrements – spells, magic items, supernatural beings – but its foundations are actually science fictional. So, for example, “demons” are simply extra-dimensional aliens rather than inhabitants of Hell and many magic items are ancient technological devices whose workings are not understood by later generations. Rather than being a traditional medieval fantasy setting, sha-Arthan is filled with strange and exotic social and cultural elements that have no analogs in real world societies and cultures, let alone the medieval European ones we tend to associate with vanilla fantasy. The setting is still developing, though, so this might be a better question to ask me in a few months when I’ve started running it.

What do you think a good setting should do?

For myself, I prefer that settings be “loose” and leave plenty of room for individual creativity. This is true whether the setting is one I’ve created or someone else has created. My refereeing style is very “seat of the pants.” I don’t plan things very far in advance and like to make things up in the midst of a session, drawing on what I already know about a setting to make new material. That’s the other thing I want in a setting: lots of hooks for me – and the players – to use for hanging our own ideas. The best settings in my opinion are the ones that aren’t so sketchy that leave me wondering about big details but simultaneously aren’t so detailed that they leave little room for me to go wild when inspiration strikes.

The future of Grognardia Games

Once again, as regular Spotlight readers will know that just as I like to begin, I want to push as far into the future as possible towards the end.

After all, this is not only a great chance to look at investing some time and money with Grognardia Games, and for those of us who do that, it’ll be good to know where we might be doing together.

Are there any other projects up your sleeve that readers might want to know or check out your Patreon about in the future?

Right now, my main project is the Vaults of sha-Arthan setting. I’ve been sharing some details of it on Grognardia, but the nitty gritty stuff, like the character classes and spells and so forth, I’ve been saving for my patrons. I have a few other projects in the works too, but they’re not ready to be announced yet, since they’re still in the planning stages.

What’s coming up in the RPG hobby that has your interest, and why?

Right now, I’m really looking forward to Chaosium’s reprints of the classic Call of Cthulhu boxed set and its earliest supplements and adventures. Call of Cthulhu is a favorite of mine – I’ve been playing since 1981 – and I long ago lost many of those early products. I hope, once they’re in my hands again, to make good use of them with my gaming groups. I’m also looking forward to the third edition of Astonishing Swordsmen & Sorcerers of Hyperborea, which is being rebranded as simply Hyperborea. Hyperborea is a terrific evocation of the pulp fantasy stories I love so much, as well as a very good rules set that harkens back to the first edition of Advanced D&D. I have been a fan of it since its first edition and have no doubt the new edition would be amazing.

Since Grognardia Games are on DriveThruRPG, we can list James’ five most recently updated products. 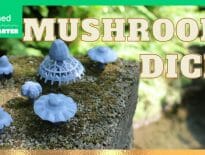 Tabletop & RPGs Can you have dice shaped like mushrooms? This Kick…