The disappointing unpleasantness around the new TSR Games continues with Gary Con and Luke Gygax making it clear that they nor anyone else in the family other than Ernie (E. Gary Gyax Jr) are involved with the troubled publisher.

The row around the behaviour of TSR Games has been awkward from the start, with the whole company apparently being founded by snatching up a lapsed trademark and then, according to Ernie Gygax, intended to appeal to anti-modernists.

No doubt some had been supporting the company because of the perceived legacy ties to Gary Gygax, the co-creator of D&D. Luke Gygax has been a far more significant part of the tabletop gaming scene than any other member recently, and the position of the family may now give even those loyalists some reason to question TSR Games (3).

The Twitter row continued publically with TSR Games (3) accusing Luke of making stuff up, noting that he was never part of TSR.

This is not a legal opinion, but if there’s an exchange of money and a written agreement around a brand of perceived value, and TSR Games (3) are harming that value, are they liable for that? Just what might Jayson Elliot be thinking right now?

Grab some popcorn, sit back and watch while the narrative is constructed (likely from whole cloth) to portray TSR in the worst possible light; ascribing to them any, probably all, the myriad SJ and Intersectional sins – homophobia, transphobia, racism, sexism, etc., from The Woke’s ever-growing list of transgressions from which there can, and will, be no redemption – all for making it clear that they would not pay the slightest heed to The Gatekeepers and their rules of engagement. Be strong, TSR, and don’t apologize… ever. The Woke doesn’t want your apology, it wants your submission. Even if you… Read more »

Are you for or against gatekeepers, Sam? Ernie’s interview was clear: this new TSR was set up to cater only to a specific type of gamer. He literally set out the gates he wanted to keep.

Your comment here days you oppose the founding principles of the TSR clone.

“Catering to specific type of gamer” isn’t gatekeeping. Gatekeeping is banning and blacklisting, which ironically is what Ernie was speaking out against in his interview when he was talking about the old talent he’s brought on. You sound an awful lot like this, guy, “Shields up, close ranks, and don’t give an inch for our ‘tolerant’ ‘inclusive’ community.” “The TTRPG scene is ours.” Ironic. Like saying “We shall show the world of our peaceful ways by force.”

Saying who, and who should not play D&D is Gakekeepering. And that’s what TSR Games (3) are doing.

I notice they deleted that tweet now, though. Guilty behaviour?

No, TSR Games wouldn’t be liable to Jayson Elliot for harming the brand value, because they own it and he’s only renting the rights to use it in a limited capacity. Suggesting that he could sue them for damaging a brand they own the rights to and he doesn’t is ridiculous. 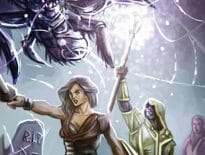