Two big changes to OSE smooths the way for newer players. One is ascending armor class and that is already an available optional rule. Two is reversing ability checks. Currently, ability checks are roll equal to or under the ability score. This can be changed to roll over easily enough. Subtract each ability score from 20 to create an ability check. Roll this number or higher on a d20 with penalties of -1 to -4 or bonuses of +1 to +4 to the roll as needed.

I also allowed some players to reroll their ability scores once. If they only ended up with one score with a bonus of +1 and had two or more scores with penalties, I usually allowed them to reroll.

I also used most of the other optional rules in OSE except high levels and THAC0. I stuck with just the core rules, although we are gradually adding in advanced rules as needed as we continue to play. Finally, I decided Neverland uses lei as money. One lei equals one gold, but the lei only retains 10% of its value as the flowers don’t last. The PCs will get full XP but the gold count won’t go too high too fast. Of course, if they find pirate treasure of gold doubloons that will be actual gold pieces.

Neverland is a unique setting that many of players were surprised by. They still aren’t sure what Neverland is exactly about and are curious to learn more. Neverland itself has several conflicting tribes like the Lost Boys, pirates, and mermaids. A tropical island, Neverland has connections to Elphame (fairyland), so both locations are easily explored by PCs. Neverland has a hex map for exploration with lists of random events and creatures. Elphame’s locations shift, so a random roll connects various locations as the PCs work their way toward their destination.

I knew for the first adventure I didn’t need a dungeon or make it too combat heavy. I decided to start with salvaging items from a ship that exploded and sank offshore. This encounter worked for keeping things simple and not too dangerous. I included magical plants the PCs could use, driftwood to make a makeshift boat and a rowboat of skeleton pirates for the cleric to chase away.

I pulled magic items from The Book of Marvelous Magic to provide unique magic items for the party. They included an anchor that could animate and swim and fight and a fairy wheel that allowed levitation in a wheel rolling motion.

It didn’t really work as I planned. Some players didn’t realize you could salvage lost gear from the ship, some didn’t want to oppose the skeleton pirates, and others were not interested in the magical plants. I still like this starting encounter, but a better explanation of old school might have been needed.

That was followed up with an encounter about hurling, a game with two opposing teams. Neverland teams included pirates, mermaids, dryads, and Lost Boys. Pan and Captain Hook did not show as this was an off season game and the PCs were not ready to face off against such powerful NPCs.

Because the game was virtual, it was hard for the players to keep track. I did like the combination of skill checks to throw and catch versus body checking by making an attack roll. The large prize provided many XP and the PCs had to work really hard to win. Everyone who used body checking used subdual damage, so while some PCs went down, none died.

With the XP earned from the grand prize lei, the thief advanced in level. Others PCs were close as well such as the cleric.

To the starting setting of Neverland, I added two additional factions. The Keepers follow a power they call the Lighthouse. This powerful force works like a giant beacon pulling civilization together and pouring out magical and societal power. Young Keepers travel, mapping trade rates and creating treaties and exploring. Some go on foot, some by horse, and others by boat. Older Keepers build an actual fortified lighthouse inside settlements for use by the community and along the shore as actual physical beacons of protection. Keepers are rugged and independent, although most will help others Keepers out when needed. They don’t have a large hierarchy and tend to work at the local level.

I also brought back the Barrier Knights. On the surface, Barrier Knights uphold Law and are in constant tension with other Knights who uphold Neutrality and Chaos. But in reality, all are fueled by the Verge, a powerful source of magic and life. The Verge, though, has a deeper purpose goes beyond the squabbles of the three orders. The Verge keeps out Nothingness, Unmaking, Annihilation, beings of madness who don’t want law and order or anarchy but the utter undoing of all reality. The Verge serves as a boundary holding these beings as bay. And it has been strong the whole the order stood and even after the order fell and most of the Knights died or disappeared. The status quo is likely to change soon.

Combing Neverland with Old-School Essentials results in a wonderful and quirky world. And not just one island. Neverland is one island on an entire planet in an infinite universe filled with planets on one plane out of many different planes and dimensions. Many different beings, powers, people, monsters, and other weirdness are waiting to be discovered and interacted with. With so many options, Neverland can fuel an OSE campaign for months. More on Neverland next month. 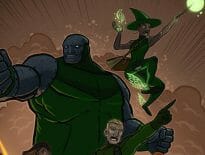 Tabletop & RPGs Name Your Own Price: Agents of BAMF 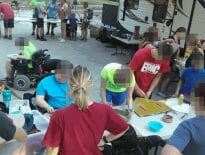