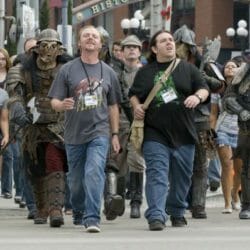 Simon Pegg and Nick Frost (Spaced! and the films Shaun of the Dead and Hot Fuzz) are working on a film with Greg Mottola (Superbad) called Paul. Paul is an alien. He’s voiced by Seth Rogen. He decides to tag along with the sci-fi fans Graeme Willy (Pegg) and Clive Collings (Frost) which results in […]