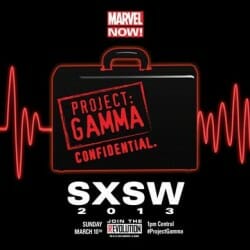 At the achingly hip SXSW (South by South West) conference that merges tech with anyone else who might be interested Marvel announced Project Gamma. In summary; it’s music that plays along with your comics. It’s a little more complex than it appears at first. Normally the way to assign music to comics would be to […]