I’m quite fond of some of the Barclays adverts on TV right now. In particular, I liked the spot the difference game that results in the giant dinosaur going unnoticed as it winks at you – and disappointed that the alternative version seems to be being aired more often.

One of the adverts shows a woman going from managing her money at a meal to spinning coins in a park. “There you go, a visual example of what I’ve just said,” says the voice (or something like that).

Who’s the voice? At first, I thought it was Justin Lee Collins – but perhaps it’s Stephen Merchant? I can tell you the actress is Marilyn O’Brien. How’s that for research?

After the waterslide iPhone and iPod touch game it’ll come as no surprise to discover that Barclays has a new iPhone app (actually; technical point; the waterslide game was Barclaycard and this app is Barclays Bank).

You can download it here or check out the preview here. At the time of posting, the game has had over 50 reviews and been rated 2/5.

I ignored the ratings and gave it a go. Can’t claim any success in cracking the high score!

I don’t think it’s a 2/5 game. It’s a bit better than that. I suspect it gets that score because it’s a simple game – you spin your coin to keep them on the end of the stick or you select the stick and tilt your iPhone to help straighten it. Compared to some of the games available in the AppStore this is basic biscuits.

However, I quite liked the simplicity. I can see myself playing it on the flight down to London. Shame they didn’t develop an Android app though.

One way to check it out before downloading and installing it is to check out this preview video from the Wax Agency (who seem to be the bods behind the game).

You know; the game itself actually has a start screen which calls them “The fabulous Wax Agency”. iTunes talks about Mad Media being responsible for the game and to be honest I’ve not attempted to untangle the agency layers – full disclaimer – I work in media and I’ve done work for Barclays (but not this game nor these ads) but I was asked by other friends in media to check this game out – I told you there were layers!

On the subject of layers and credits; I suspect we won’t see much in the way of credits for the art. It seems to be a very stylistic approach. The style does seem to fit the gameplay, though.

Nice app, there’s a mobile BANKING app being released soon.
you can preview the app or sign up to be a beta tester at mobilebarclays.com

Hi, I can see that the app is your creation. It looks like you’ve put some work into it…. to be honest, I don’t think anyone should put their details into a third party banking app as I’m sure it’s against the T&Cs of their account. Aren’t you worried about Barclay’s attack lawyers?

time to read: 2 min
Books An introduction to Android Karenina 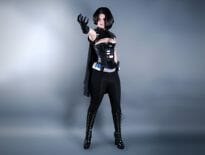