Yesterday, Games Workshop published a notification of a change in major holdings as the investment firm Standard Life Aberdeen increased the number of shares they own in the British wargame company. Standard Life Aberdeen now has 32, 674, 839 voting rights, but if that sounds like a significant number, it is only 6.69% of all the voting rights. Games Workshop is a big company.

Yes, that’s a Sister of Battle (I believe) in a vital role in the new Warhammer 40K cinematic. I like to think MRE gatekeepers around the web are wincing in horror and moaning already.

The new edition works seamlessly with all existing codexes and Psychic Awakening books, which is particularly important as we still have three more Psychic Awakening books to go! They were all written with the new rules in mind, so you can explore these dark new events knowing all your existing rules will work when the new edition finally arrives.

I’m calling that backwards compatible with your previous Warhammer 40K purchases, or some of them, anyway.

As the cinematic trailer implies the Necrons play a prominent role. These are strange skeletal robots that have been laying in stasis for more than 60 million years. They were created by a race known as the C’Tan (the Star Gods) to fight the Old Ones. Yikes!

Geek Native readers will know that Warhammer 40K RPG Wrath & Glory has only just re-released. We can only hope (and assume?) that Cubicle 7 knew about the upcoming new Warhammer 40K and that brand new RPG isn’t going to be immediately out of date.

In the meantime, Games Workshop has highlighted their nine reasons why you should care about Warhammer 40K.

What do you think? Are you a Warhammer 40K pro? If so; let us know about how this new edition appeals to you? Have GW got it right? Or, are you now tempted for the first time? 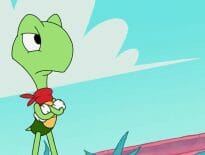