You are here: Home / Movies / The first trailer for Shazam drops

Billy Batson has the ability to turn into Shazam and it very much looks like he can do so in a movie part of the wider DC world. That’s a Batarang on proud display for all to see.

When we first started hearing about Shazam the talk was of Peter Segal directing a movie with Dwayne Johnson as the evil Black Adam. That’s not happened. The director is David F Sandberg, better known for low budget horror, and Mark Strong (Kingsman) as Dr Thaddeus Sivana.

Zachary Levi is Shazam. He was Fandral in two Thor movies as well as being Flynn Rider in Tangled but is probably best known as Chuck from the TV series Chuck.

The first trailer for Shazam drops

time to read: <1 min
Movies So many monsters in Godzilla: King of the Monster … 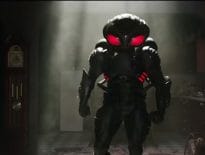