The Warhammer 40,000 movie Ultramarines is shaping up nicely. Today they’ve announced a truly impressive line up of voice talent.

John Hurt (Hellboy, Alien), in particular, seems to have some prior knowledge. In the video and press release he’s quoted saying;

“I know quite a lot about Warhammer 40,000 because my elder son was into it. I used to take him down to the store in London’s Oxford Street so he could see it in action. It’s a very different world which really teases the imagination.”

Terence Stamp (Superman, Halo 3) seems to be being sucked in. He’s quoted;

“Warhammer 40,000 is an incredibly strange world, yet one with rules,”

“I felt very comfortable with Ultramarines – in fact, it’s really the culmination of a lot of things I’ve been in.”

Sean Pertwee (Equilibrium, Mutant Chronicles, Dog Soldiers) is all about the fans;

“Before Ultramarines, I had no idea about the depth of Warhammer 40,000. I used to be into graphic art, so I find the concepts and architecture and character designs quite extraordinary. This film really is being made for the fans.” 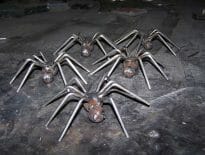