Cool Mini Or Not started publishing board games five years ago. They’ve made heavy use of Kickstarter and produced some great games. 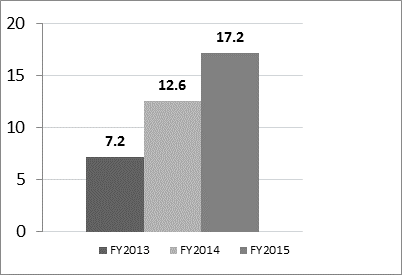 I’m not an accountant – especially not an accountant familiar with revenue calculations in Singapore where Cool Mini or Not is based – but Kickstarter’s own Tax Guide suggests that money raised on the platform counts as income. In other words, Kickstarter is a big chunk of Cool Mini or Not’s success but it’s certainly not the whole story. The company is doing well with retail products. Additionally, revenue is not profit.

So, what’s next for Cool Mini or Not? In a blog post that describes their success the company promise that Wrath of Kings and Dark Age are getting a major push. They’ve bought Sheriff of Nottingham and they’ll start to distribute Krosmaster products in English.

The staff is getting more senior too. Jules Vautour is coming on board as Director of Sales and Ruby Nikolopoulou, formerly of Asmodee North America, is joining as Director of Marketing. We should expect to see Cool Mini or Not (aka CMON Limited) around more often.

Cool Mini Or Not push past $17m in revenue