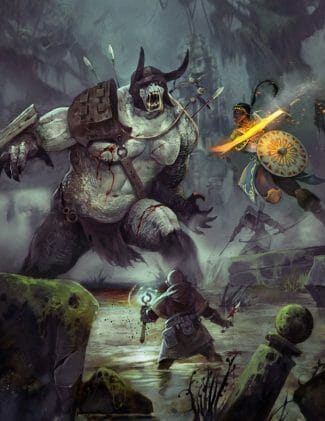 The 144-paged full colour hardcover has art from Svetoslav Petrov, rules for character advancement up to level 20, three different character classes and magic.

AGE was first used in the Dragon Age RPG and the new system has been reworked to be broader, more generic and without any links to the world of Thedas. This means Dragon Age players will be familiar with the rules but there are differences; especially around the magic system and character generation.

One of the gamers who petitioned Green Ronin to take Dragon Age’s AGE system and develop it into something more generic was Wil Wheaton. As a result AGE is being used to power Wheaton’s post-apocalyptic techno-fantasy Titansgrave.

Green Ronin are also working on a relaunch of their Blue Rose RPG. The official site confirms that AGE will be used for the game.

Of course, progress never comes easy. The simple idea that women should get equal pay for equal work—not to mention the opportunity to work in the fields of their choice—is crazed radicalism in the eyes of some. And while the Supreme Court may have declared that racism is over in the USA, anyone with an ounce of awareness can see that is manifestly not the case. That many of these issues are contentious is no surprise to us. Blue Rose itself was subject to a reactionary backlash from certain quarters. This sort of thing has just gotten worse, particularly in the video game arena, and politics in America has also taken an ugly turn. So while, yes, we have seen a lot of social progress, there is still a lot of work to do.

Titansgrave and Blue Rose will be first Fantasy AGE games