You are here: Home / Geek Stuff / Invoking for Effect: A Review and Commentary on Fate Core

Recently, I was criticized for comparing every game out today to Fa 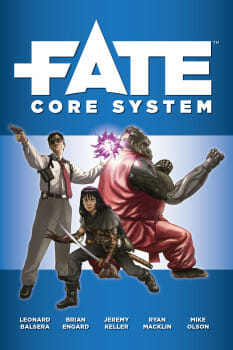 After some thought, I realized it was finally time to give Fate Core a review and explain why, exactly, I think this game is today’s standard-bearer for tabletop roleplaying, and why every game that’s come out since can and should be compared to it. It’s not the only game I hold in this regard, of course…Apocalypse World is the yin to Fate Core’s yang, the “other one.” But I’ll talk about that in another column.

Fate Core, as we see it today, is technically in its fourth edition. Its ancestry stretches back to one of the first big “indie” RPGs of our time, the Fudge System, which came out around 1995 or so. Since then, Fate has powered several critically-acclaimed RPGs, chief amongst them 2006’s Spirit of the Century and 2010’s The Dresden Files. So it’s easy to see that Fate Core didn’t just spring out of nowhere: it’s been evolving with the times for nearly the past 20 years. The game is no trendy flash in the pot; it is a refinement, an evolution, of ideas that have come before.

So what is so finely-evolved about Fate Core as a roleplaying game? To take as broad of a view as possible, Fate Core is revolutionary because rather than trying to emulate a particular genre or theme, it captures an entire philosophy of gaming: namely, the idea of collaborative design. Almost every part of a Fate Core game is tailored to the exact specifics of you and your table of friends. Many, many RPGs in the past, from GURPS to Hero System, have flaunted themselves as “generic” games, but what that traditionally means is that they have rules for everything; you can just decide what rules to apply dependent on the game you want to play. Fate Core doesn’t take this kitchen sink approach to game design; instead, its abstracted rules are truly capable of emulating anything, within a particular style.

The penultimate example of this is the Aspect. In Fate Core, an Aspect is a word, phrase, or whole sentence that specifies something narratively significant. It can be as simple and mundane as a Big, Red Umbrella, or it can be an abstract theme like the Struggle to Survive. In play, an Aspect gets invoked by spending a Fate Point; an invocation will result in either a sizable modifier to a roll, or a complete reroll of the dice. A GM can alter the flow of a narrative by compelling an Aspect, granting a Fate Point to the affected player in exchange for whatever interesting thing just happened. This “Fate Point economy” drives the gameplay, both from a mechanical and a narrative point of view.

The Aspect, as a concept, has transformed tabletop RPG play. An Ominous Grey Fog is no longer just a -2 penalty to hit; it’s a piece of the story that can be used by player and GM alike, manipulated either tactically to affect a dice roll or narratively to explain how a bad guy disappears down a crowded street. Making your character Stubborn Because He’s Always Right isn’t a five-point disadvantage that you picked up so you can maximize your damage with handaxes; this is a part of the story that can lead to complications far beyond simple math. The GM is fully within her capabilities to hold up a Fate Point and suggest that since your character is Stubborn Because He’s Always Right, he’s about to come to blows with someone in the tavern over some petty argument.

Even though the Aspect is the clearest example of Fate Core’s evolved gameplay, even the game’s more mundane concepts glisten with new possibilities. Every action a PC takes in Fate Core can be defined as an attack, defense, an advantage, or the overcoming of an obstacle. Each one of these four actions have their own procedures for resolution. Framing action like this allows both the players and the GM to organize their thoughts and have broad outlines on how to do anything. Take one of the ultimate headaches in RPG gameplay: the grapple. In other games, there may be whole paragraphs describing how to grapple someone, what that someone can do whilst grappled, and how to escape that grapple. In Fate Core, you can handle it as the grappler creating an advantage (“Grappled”) on their target. That advantage is an Aspect that can later be used as a modifier, a reroll, or narrative justification to do something else. On the target’s turn, they can try to remove the advantage, which can be considered overcoming an obstacle. Simple, playable, brilliant.

The GM has tools like this, as well, to make running an adventure just as easy. Every scene featuring a resolution mechanic can be broken into one of four categories: an obstacle (requiring a simple roll to get past); a contest (two or more parties vying for a mutually-exclusive goal); a challenge (a dynamic series of obstacles with a resolution that varies depending on what obstacles get overcome); or a conflict (two or more parties trying to remove one another from the scene, either figuratively as in an argument, or literally as in a duel to the death). Each category has its own guidelines and procedures. A GM can create an adventure by compelling one of a character’s aspects (perhaps someone in the party has Sworn Revenge for the Death of His Sister), then making a scene revolving around each category (a challenge to gather information on the bad guy’s wherabouts; an obstacle to break into the bad guy’s lair, a conflict to beat up the bad guy’s cronies, and a contest to capture the bad guy fleeing the scene). Slap some stats on that bad guy, and you’ve got a dynamic, multi-faceted, complete adventure that requires almost no preparation whatsoever.

The liquid nature of all of these details allow Fate Core to emulate almost any genre, right off the page. But with a little forethought and some collaborative discussion with the other players at the table, those emulated genres can get deeper and more thematic, offering an experience that can parallel entire 400+ page corebooks devoted to that single setting. Use the conflict rules with social skills, for example, and you can create your very own House of Cards roleplaying game. Allow someone to make attack actions with their Will skill, and now you have psionics in your game. I’m over-simplifying a little here, but you get the idea.

For all its brilliance, Fate Core is not always the ultimate answer. For example, the collaborative, willing nature of the mechanics makes Fate Core a difficult fit for horror games, where a lack of control and helplessness before evil are necessary to create the tension the genre is built on. Likewise, mystery games can be ineffective in Fate Core, since with the rules as written, the PCs can theoretically create their own clues simply by spending Fate Points and effectively write the mystery themselves. Fate Core uses special dice, formerly called Fudge Dice but now often called Fate Dice, that produce results of +1, -1, or 0. Four of these are rolled at all times, producing numbers between +4 or -4, with a bell curve centered on 0. This is a fairly small range and can be unsatisfying for groups looking for a more simulationist style game, or a system with more granularity.

I’ve argued with Fate fanatics in the past about this, but there’s also a problem (well, maybe more a concession than a problem) in the game that I refer to as “meta-dependence.” In other RPGs, a player can simply say “I do this,” and the GM responds with “Okay. Roll this against that,” the player does, and the GM describes what happens. This fundamental design paradign shifts just a little with Fate Core. In Fate, it’s often not enough for a player to say “I do this;” to really get the most out of Fate Core, a player needs to understand how his or her Aspects work so they can be invoked (or compelled) for maximum effect and drama. If the player doesn’t do this, the GM can be double-burdened with running the narrative of the entire adventure, plus keeping an eye on the individual aspects of your character (and everyone else’s) to affect that narrative. In my experience, this can lead to bland, unsatisfying games if the players are unwilling or unable to pull their weight. Fate Core is a game that very, very much puts out what you put into it. It’s possible for a newcomer to not know a single thing about the capabilities of his or her character in a pickup game of D&D and still have a great time; such a thing seems much harder to pull off in Fate Core.

But even with those concessions, Fate Core is quite possibly the closest thing I’ve ever seen to a perfect roleplaying game. The versatility of the mechanics is at a level unlike anything I’ve ever seen before, and the rules are heavy enough to be satisfying but light enough to be picked up and understood right away. It’s for these reasons that I consider Fate Core one of the most significant games in the hobby today. “Hardcore” role-playing gamers owe it to themselves to get familiar with the system. Even if the concessions previously mentioned are deal-breakers, there’s enough bar-raising material here to forever change the way you look at RPGs. Not only is Fate Core available for the low price of Pay What you Want, but it’s also available in its entirety for free in HTML format, making the game both mechnically flexible and economically flexible, as well.

My critic was right: it is unfair to compare so many modern games to Fate Core. Because Fate Core is just so damn good.

Invoking for Effect: A Review and Commentary on Fate Core 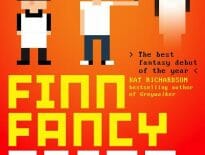 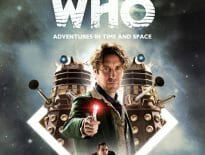 Tabletop & RPGs Heal Thy Self: Review of the The Eighth Doctor Sou…
wpDiscuzComment Author Info