You are here: Home / Geek Stuff / Short story: The Tale of The Laughing Shih

The Tale of The Laughing Shih is a short story by Danie Ware, author of the Ecko series and social media brains at Forbidden Planet.

This is RPG fiction; from tabletop gaming sessions of White Wolf’s Kindred of the East. The story was written to introduce the character Chao Ling Jai’s background and childhood. Do you ever do that? Introduce a character or session with a story piece?

The Tale of The Laughing Shih 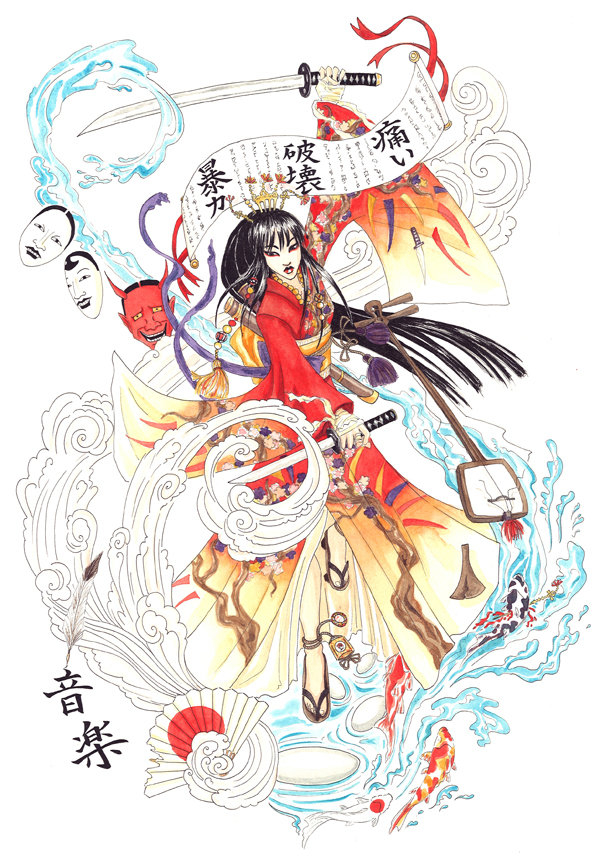 For my dear Master – friend and tutor, guide and reason.

‘Once,’ you told me, ‘There was a Shih, not unlike myself, who charmed both serpents and men in the bazaars about Delhi and Calcutta. He was young and wilful, laughed often, and his Master despaired of him ever learning the true meaning of his Calling.’

Do you recall the Tale, Master? It was the first Tale you told me. It lifted the darkness of the destruction of the Home of Children where I was raised. Perhaps the Mother would have heeded it also – but she had been the first to perish.

I was too young to understand how my World could be turned inside out so swiftly, but old enough to fear for my sisters, younger than myself. They screamed as he drained them and I was sickened to my belly.

‘”Ah, you are young and foolish’” said the Master of that young Shih, not unlike myself. “You will learn wisdom as you grow.” “But there is so much pain,” the young Shih said. “Surely our laughter lifts the despair of the Sixth Age, even for a moment?”’

Do you remember, Master? You told me the Tale to keep me from screaming, I think. The House of Children was burning – he had raised great, furious fires and the heat was hungry, like he was. In the smoke and the fear, I had been trying to help my sisters to flee.

Beautiful. Pale, with eyes like lanterns and a smile like a tiger. He held his hand to us. “Come to me, my children,” he said. “I will set you free.” His call was strong – he would protect us.

‘”Pain!” said the Master of that young Shih, not unlike myself. “Pain teaches you the preciousness of life! It is the Yin within the Yang – only the Dead feel no pain!”’

He had been our father. We could not gainsay him.

‘“But, Master,” said that young Shih, not unlike myself. “If what you say is true, then our laughter must be the Yang within the Yin, One cannot be, without the other.” “Brave words,” said the Master of the young Shih. “But they are words only. They sound like wisdom, but they are empty.”’

The hallway was long, narrow and windowless. Smoke had filled my mouth and eyes. He saw you and said only, “Shih.”

And you laughed at him, “You noticed?” you said, but he flowed like the smoke. “These are my daughters, my family,” he said. “They trust me. They need me and love me. They will die without me.”

I remember you turned to me, so sure you seemed. “I hope you’re brave, little one,” he said.

‘”Are you brave?” asked the Master of that young Shih, not unlike myself. “It is time to set for you a Test. You will take your best blade, and you will spend one night in the Tomb of Chang’o.” “What must I do?” asked that young Shih. “Come,” said the Master, “Bring your bedroll and your waterskin. I will show you where you must go.”’

“Still-sheathed blade, Shih?” His smile was like a knife. ”Foolish. Girls, he threatens me.” Do you remember, Master? Little, work-callused hands; tiny white teeth?

‘So the young Shih, not unlike myself, took up his bedroll, his waterskin and his best blade. He travelled to the Tomb of Chang’o, where his Master sealed the door upon him and left him in a darkness as black as the walls of Yomi. The young Shih was strong, filled with energy and determination. There was nothing to fear in darkness, and he sat with his back to the cold wall, and waited for the morning.’

His call was empty to me; I was not among your attackers. Horrified by my sisters hurting you, I pulled them from you, bits of your flesh coming away beneath their nails. Blood oozed across your skin, glittering in the firelight.

I helped you, I think; enabled you to surge free from the girls that surrounded you and draw your blade with a sound as sweet as song.

“You are a brave girl,” you said to me. “Now go!” You were faster than I could see, angered and deadly. He moved like water to avoid your blade, but you broke his concentration and my sisters stopped, and were huddled and crying. I scooped them before me and we fled past him to the hallway’s end – where there were streetlights through the shutters, making a puddle of warmth upon the floor. “Go,” I said to my sisters. “Run!”

They ran. And I came back.

‘So,’ you told me later, ‘That young Shih, not unlike myself, sat calmly at first, and waited for his Master to return with the rising of the sun.’ You paused and you looked at me. I leaned forward, eager for the rest of the Tale. You grinned, I remember. ‘He waited, and he waited, and he waited. And as the cycle of time passed him, he began to Fear. At first, he laughed at himself, gathered up his bedroll for warmth and security, and emptied his mind for sleep.’

You were fighting, light-footed and as swift as a thought; your blade was a rush of motion that protected you from him. Claws slashed, teeth glinted, eyes burned like the fires about us. He wore the smoke and the darkness like a great cloak. He was strong, but you did not fear – you were armoured by your skills and he could not touch you.

I had never seen such a dance, and I was transfixed. With my home burning about me, I could not move.

‘But sleep did not come. That young Shih, not unlike myself, found that his mind filled with images, and his blood with deep cold. The morning, perhaps, had come and gone – his Master had abandoned him. He was helpless within this Tomb until he perished. Perhaps he had perished already – perhaps the Servants of the Yama Kings came for him even now. He pushed back his bedroll and his hand found the hilt of his best blade.’

You moved like lightning from the sky, like water, like a striking serpent. Your blade glittered, angry, but you were as controlled, and as swift, as a thought. He fell back, sparks dancing from his claws. His eyes shone baleful. And he hissed.

“Shih,” he said. “Why do you fight me? For these girls? You know there are not families to care for them, crops to feed them, or husbands to protect them as they grow. These are the unwanted, abandoned as babes by unloving mothers; unnamed and outcast. Without such Houses as these, they perish in the street. We bring them security and we bring them purpose.”

I heard his every word, as I heard your laughter.

“Keep trying, life-sucker, you may even believe it yourself.”

“I give them function.”

“You give them death.”

You crouched, low, low to the matted floor, your blade a tooth. I held my breath and blinked my eyes against the smoke. Again, you moved so swiftly! The precisions of your body and blade were like a spirit’s!

‘That young Shih, not unlike myself, stood motionless and listening, his best blade held like a mantra. Cold stole across his shoulders and into his heart. His hands shook and his blade tumbled from numb fingers to fall, forgotten, to the dark, stone floor.’

A great slash of claws and your blade clattered against the wall. I saw you falter, and he saw it too.

‘He stood, alone in the darkness, surrounded by the demons of his own mind. He was a young Shih, not unlike myself, and all he knew was Fear.’

Your stance was strong, but he had seen you weaken. His tiger-grin spread like a predator’s and his knowledge of his own strength was like passion. You were afraid – I could see it.

“Shih,” he said. “Why defend these worthless mortals? They’re parasites; they drain your society of resources and wealth. We are the same, you and I, why lose your life…” suddenly, he saw me “…for her?”

Your glance snapped to me. I saw horror on your face.

‘In the darkness of that Tomb…’ You told me the ending of the tale as you stood over the body of the Devil-Tiger I had called ‘Father’. ‘In the darkness, in the cold, in the fear, in the demons of his mind,’ you said, ‘that young Shih, not unlike myself, remembered his greatest weapon.’ You smiled at me. ‘He laughed!’

In the smoke, and the fire and the fighting, I saw the truth of what my Father had been. I saw he would kill you. There was fear in my heart, but I ran from where I had crouched, ran right up to him and jeered at his power.

I laughed. I laughed at him!

It bought you a moment, a moment to secure your best blade and strike his head from his shoulders.

‘And so he laughed, that young Shih, not unlike yourself. And as he did so, the seal upon the Tomb was broken. His master awaited him and the sun was rising to cross the skies.’

The hallway was still, only the sound of the flames and a distant shouting. “A brave girl indeed,” you said to me.

“Shih are many things,” you said, and you will learn them all, in time. “Perhaps we can begin with a tale?”

Short story: The Tale of The Laughing Shih 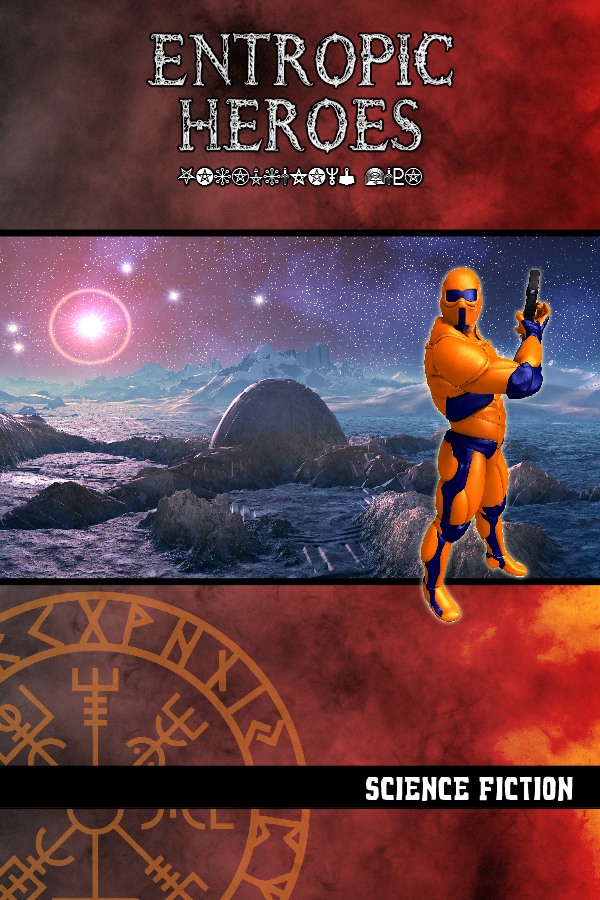 Interviews What’s it all about? Entropic Heroes: Scienc… 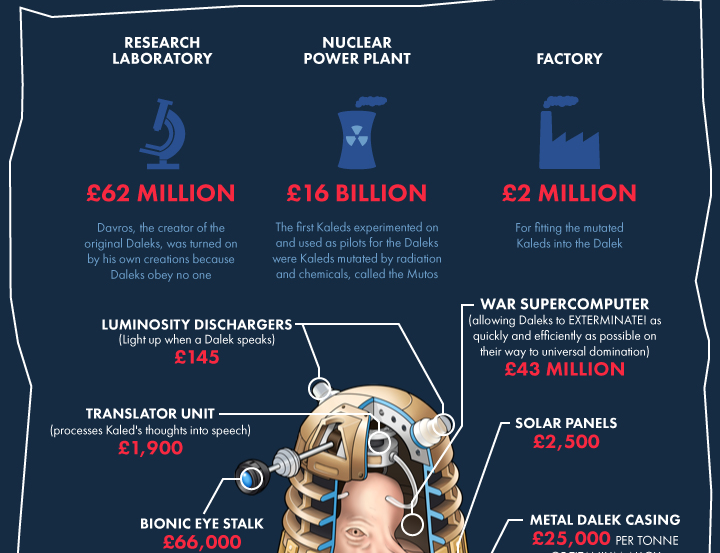 TV How much would cost to make a real Dalek? [infogra…
💰 Copper Coins 💰 Geek Native is an affiliate and may earn commission on purchases you make from third-party sites.
🍪 Privacy & Cookies 🍪 The site uses cookies to survive. By accessing the site, you agree to use your browser to control cookie use or take 1d4-3 privacy damage (tracking). If you defeat cookies via ad blocking, please consider the Patreon. An intro to cookies, and how to control them, can be found here. I Manage Cookies