You are here: Home / Games / Tabletop & RPGs / Undead and Loving It: A Review of End of the World: Zombie Apocalypse 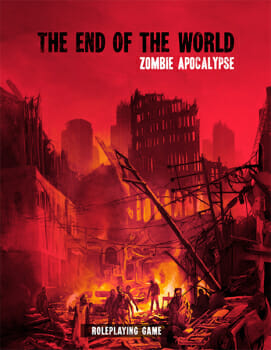 End of the World: Zombie Apocalypse

What is it with pop culture and zombies? In the introductory chapter of its new roleplaying game, End of the World: Zombie Apocalypse, Fantasy Flight Games breaks it down for you, plain and simple:

Zombies are the perfect manifestation of the end of the world. Inexorable, unstoppable, contagious, and beyond understanding—whatever scares you, whatever you think could destroy the world, it’s represented through zombies. For everything from drug-resistant superdiseases and environmental disasters to murderous ideologies, there’s a metaphor to be found in tales of the living dead. Zombies represent all the worst aspects of humanity pushed to eleven: unreasoning, self-destructive, merciless. It’s not hard to relate to the survivors in a zombie story. They are among the only rational people left in the world, surrounded by mobs of brain-deadconsumers. And if you’re not careful, you’ll lose your individuality, too. It might even be tempting to just give in and join them.

What follows is 155 pages of brain-devouring goodness. The first of four promised End of the World titles, End of the World: Zombie Apocalypse is a narrative-driven, rules-lite roleplaying game about…yup, you guessed it…the zombie apocalypse. Unlike most RPGs, in The End of the World, players are expected to make themselves as characters. Also unlike most RPGs, The End of the World is built for short-term, even single session, playthroughs. Although these are both relatively minor innovations…2011’s Outbreak: Undead is also designed for players to play themselves…they add up to more than the sum of their parts. Making yourself as a character ties you to the game in a profound way, and the “no tomorrow” nature of a one-shot game means nothing is sacred. The dreaded “TPK” (total party kill) is never far from the narrative in a good game of Zombie Apocalypse.

Fantasy Flight came up with some clever ways about making your character that makes the process fun and not too painstaking. You rate yourself on a scale of 1 to 5 in six attributes. The other players at the table anonymously vote on whether you under- or over-estimated your ratings. You’ll get a bonus or penalty based on the results of the vote. In another fun twist, your starting gear is literally anything in the immediate area you’re playing in. Be ready to write things like “folding chair” and “bag of Doritos” in your inventory! GMs are encouraged to exact detail from their players, too; the battery level of their cellphones, the approximate amount of water in that bottle, and so on. Characters also have Features…what might be called advantages, traits, or aspects in other games…that can help you out, things like “educated” or “sharp eye.” Negative Features, called Traumas, also come into play (which can represent things like “Diabetes” or “forgetful”).

Task resolution, on paper, may look counter-intuitive, but in practice is quick, easy, and fun. You roll six-sided dice of two different colors, one color being positive and the other being negative. Each positive die is an asset to your roll: a good set of tools when picking a lock, your “sharp eye” feature when looking for supplies in a looted store, the folding chair when trying to bash a zombie, etc. Each negative die is a disadvantage to the roll: the complexity of the lock, the messiness of the store, your fear of the zombie you’re trying to bash, and so on. You roll all dice together, and positive and negative dice of the same value cancel each other out. If you have at least one positive die with a value lower than the applicable attribute rating, you succeed. Each uncancelled negative die remaining in the pool causes one point of Stress, regardless of the die’s value; this represents the ongoing strain (physical, mental, or social) in your never-ending quest for survival.

These rules cover less than half of the book’s length. The majority of the page count goes to five zombie apocalypse scenarios. Each scenario is basically a zombie sandbox. The characteristics of the zombies, the timeline of society’s inevitable collapse, and the priorities for a group of surivor PCs shift throughout each scenario. Each scenario also has a number of detailed scenes and setpieces, as well as stats for key NPCs (including stats for scenario-specific zombies). Each scenario is detailed enough to play right off the page, but vague enough that a GM shouldn’t feel too constrained. The scenarios cover all the classic notions of zombie apocalypses, such as pandemics, mysterious meteorites, and…my favorite…no reason at all. Each scenario has just enough of a spin so that players shouldn’t be completely comfortable in their knowledge. End of the World does not try to discourage meta-game thinking, and in fact counts on players’ anecdotal knowledge of zombies from pop culture to help sell the setting.

And that, as they say, is that. There are no hard-and-fast rules for hunger or exposure; no combat rules covering grappling, cover, or line of sight; no skill list, and character progression is basically limited to the acquistion of new Features and the removal of Traumas. The End of the World is perhaps the first Triple A indie RPG I’ve ever seen: a game with the slickness and production value commonly found in Fantasy Flight products, but with a scrappy independent vibe more reminiscent of Dungeon World than Dungeons & Dragons. There’s nothing in this game that can’t be done with a good generic RPG like Fate Core or GURPS (and its excellent GURPS: Zombies sourcebook), but what The End of the World does bring to the table is the comfort and convenience of a complete game, in a very slim and attractive 155-page book. Compared to other zombie apocalypse RPGs, this game is faster and easier (though far less comprehensive) than the simulation-intensive Outbreak: Undead, and seems destined to dethrone the current zombie apocalypse RPG weapon of choice, All Flesh Must be Eaten. Though there’s nothing here that’ll turn zombie detractors, fans of all things undead can safely run…or walk, or shamble…to their favorite hobby shop, pick up End of the World: Zombie Apocalypse, and have an exciting new take on surviving in a world gone mad.

Note: My copy of Fantasy Flight Games’ The End of the World: Zombie Apocalypse was provided for review.

ChrisTheProf GeekNative The more I hear about it, the more I want to. Heard a podcast where the folks did the character creation part.

Undead and Loving It: A Review of End of the World: Zombie Apocalypse 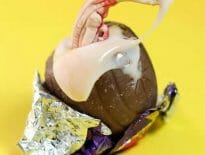 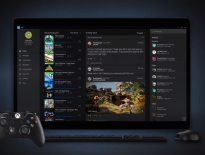