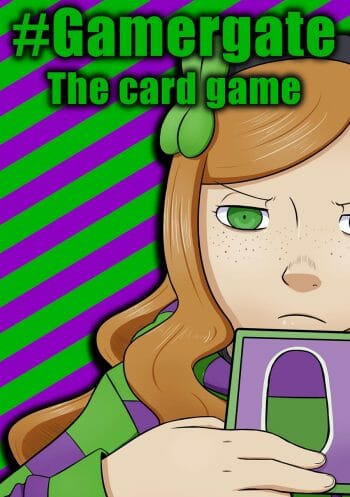 #GamerGate is a card game by James Desborough’s Postmortem Studios. It is named after the stormy and hotly contested row among computer gamers and games journalists. This is a row which has involved bomb hoaxes, death threats and doxxing.

Postmortem Studios described the game as a joke, saying;

Gamergate the Card Game commemorates THE defining culture war of this generation – by taking the piss out of all sides.

However, in the same post, the description of the game also makes it clear that all players are opposed to the ‘Social Justice Warriors’. This is a term used ironically by one side of the debate. Desborough’s description read;

A two player adversarial game, you’ll compete with the Social Justice Warriors trying to get away with egregious breaches of ethics before Gamergate can create enough of a fuss and social pressure to expose them, all the while flaming each other on Twitter, screaming for attention and being trolled hard.

Desborough is no stranger to controversy. There have been petitions to RPG publishers which urge them not to work with him. In 2012 Geek Native interviewed Desborough and put it to him that some gamers find his gamers to be “hateful, violent and misogynistic”. As ever, his responses were robust.

It is no surprise that the Postmortem Studios blog is watched closely. It didn’t take long from the launch of the #GamerGate card game for the stores stocking it to get complaints. It wasn’t just gamers complaining; RPG publishers who use OneBookShelf’s ebook sites RPGNow and DriveThruRPG also complained. In an update Desborough noted;

As well as complaint bombing, part of the problem seems to be other companies threatening the site with the pulling of their own products!

Today, Steve Wieck the CEO of OneBookShelf addressed the issue in an email to all publishers. He didn’t name the game. He refered only to a card game whose theme is the Gamergate issue. The email titled “Banned a Title on OneBookShelf Marketplaces” pointed out this was the first time a title had ever been banned and that the action was not undertaken lightly. He noted;

Normally, satirical works would be welcome on our marketplaces. However, we feel that there are situations where satire is inappropriate. For example, we do not think that a game released today that satirizes police killings of minorities in the USA would be appropriate. Regardless of how one feels about an issue like that, we feel that it is too current, too emotionally charged on both sides, and too related to real-world violence or death to make it an appropriate matter for satire.

The consideration Wieck and the OBS team made is clear. He acknowledges that some publishers did threaten to drop the store.

Some publishers also complained about this title, and a few publishers let us know they would not be interested in continuing to work with us if we carried it on our store. We will not allow any publisher to dictate content policy onto any other publisher, explicitly or implicitly. If any publisher ever decides to discontinue business with us because our content policy errs to the side of being too open, rather than restrictive, then we will respect their decision to leave our marketplaces and wish them well. To be clear, no publishers’ comments had any bearing on our decision to discontinue selling this title.

TV Official Doctor Who Christmas trailer: Last Christ…
💰 Copper Coins 💰 Geek Native is an affiliate and may earn commission on purchases you make from third-party sites.
🍪 Privacy & Cookies 🍪 The site uses cookies to survive. By accessing the site, you agree to use your browser to control cookie use or take 1d4-3 privacy damage (tracking). If you defeat cookies via ad blocking, please consider the Patreon. An intro to cookies, and how to control them, can be found here. I Manage Cookies