You are here: Home / Geek Stuff / Art / UK misses out on Wii Netflix? Try origami instead 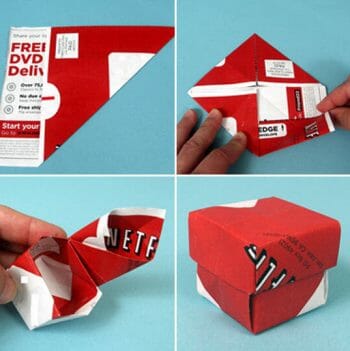 All the consoles are teaming up with content producers and distributors. You can watch Sky via your Xbox (if you’re a Sky subscriber), you can stream movies or even download comics with your PlayStation 3 and with you Wii you will soon be able to rent Netflix films too.

Well, that’s the case if you’re in the States. No news of Netflix Wii making it to the UK. Let’s just say you’re not content to watch the BBC’s iPlayer on your Wii. What else can you do?

What about some Netflix origami? You could build yourself a little box so the packaging holds more than just DVDs. The gurus over at Apartment Therapy show you how.

UK misses out on Wii Netflix? Try origami instead

Cool Tech Surely you need one? An underwater chainsaw