You are here: Home / Games / Tabletop & RPGs / Doing It Old Style: A Review of The Fire Demon – Death Awaits You! 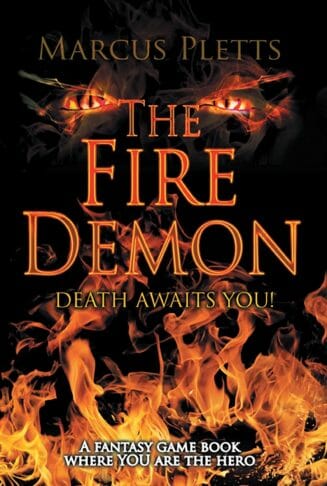 The Fire Demon: Death Awaits You! on Amazon

In the 1980s, Choose Your Own Adventure and Fighting Fantasy books forged the way for children (and many adults) to enter fantastic worlds, where they held a measure of control in the outcome. The books allowed the reader to steer the plotline of the story through a finite number of variations, many of which ended in failure – and perhaps only one of which served up an ultimate and ideal success. Over time, these books became more complex and demanding, including various rules to add further layers of chance, and even skill, in pursuit of a successful conclusion.

At the same time, tabletop fantasy games often sought adventurous challenge at the heart of a subterranean layer or dungeon, a series of rooms or caves home to blood-thirsty monsters. Frequently, the architecture and ecology of these locations defied all reasonable understanding, creating an environment first-and-foremost designed to provide a challenge. Reality? Well, that generally got kicked into touch, in favour of fun and something to poke with a sword.

The Fire Demon: Death Awaits You! returns to those heady days of dungeon-for-challenge-but-lets-skip-the-sense adventure.

Form
The Fire Demon: Death Awaits You! is part one of a four part, old-style role playing adventure, written by Marcus Pletts. Available in either ebook or paperback format, the book runs to 210-pages, single column text.

The book contains a sparse scattering of good quality grayscale artwork – nice pieces, perhaps a little dark, of which I would gladly have welcomed more. The start of the book contains a map of the region and a numbered diagram of the dungeon.

Features
The Fire Demon: Death Awaits You! relates an adventurous escapade between a group of adventures and the titular Fire Demon, who appeared courtesy of an exiled and aggrieved wizard. The format of Death Awaits You! falls somewhere ‘twix solo adventure, like the Fighting Fantasy series, and more traditional group-style tabletop ‘roleplay-in-a-paperback’, like multi-player Tunnels & Trolls adventures or Dave Morris’s Blood Sword gamebooks. The latter provided a cross-referenced paragraph-style format of game, broken out into chunks with different options offered, which allowed someone to play alone or orchestrate a group game, with a somewhat linear path.

Character Creation and Combat
TDT uses a simple set of rules for handling character creation and combat, which reminded me a little of the Yu-Gi-Oh! Card Game or a Japanese console-based role playing game, with inflated – and therefore somehow more manageable – numbers for health and damage. Your adventurer has a Health score numbering in the thousands, weapons strike for numbers in the hundreds, and quaffing a pint of beer restores 250 Health Points.

Each character has a Combat Skill and a Luck score, as well as Health Points. Players randomly generate all score at the start of the game, with a small adjustment depending on their chosen character type – selected from Archer, Barbarian, Knight, Mage, Ranger and Warrior.

When attacking someone, you roll 2 six-sided dice and compare it against your Combat Skill on a chart at the back of the book. You can also choose to Strike With All Your Might – making a check against your Luck with the chance to add an extra +400 HP damage, on top of whatever your weapons adds and the chart indicates. If you hit, add all the damage up, modify for the opponent’s Armour, then deduct whatever remains from their Health.

Should you roll a double-6, you test your Luck – and if successful, deliver a one-hit-kill Death Strike. Adversaries can also deliver a Death Strike; the players might be relieved to hear – it adds just +500 HP to damage caused rather than felling them outright!

The game includes a short list of spells for magic-using characters and equipment lists, which include the option for random generation of kits and treasure. If you find or have the chance to buy a potion in the game, you can roll a six-sided dice to determine its properties.

The Game
The author presents much of the book in numbered references, with brief descriptions of locations, followed by a bold D – indicating the players need to make a choice – followed by italicized information relating to specific choices they might make. The book leaves descriptions of passageways to the Gamemaster, along with improvising where the players choose to do something not allowed for in the text.

The book encourages a GM, where possible, to be creative and flexible, rather than closing down all options. It also makes it clear that unreasonable or impractical options should be met with a firm ‘No’. Cut the players dead if a negative response is the right thing – but, if you can avoid it with an option or challenge, all the better.

The majority of the adventure takes place in a dungeon. The dungeon follows a construction principle with strong connotations of console games or adventures from the 70s and 80s. The author admits he started writing this adventure at the tender age of 11 years, so the influence likely comes from game styles of the same period.

You definitely need to suspend your disbelief and have fun, as otherwise you might wonder how any honest trader could survive in a dungeon like this. The living arrangements seem likely to undermine a business faster than a worldwide recession.

One reference, mid-way through the book, reminded me of Pookie’s Eating House from the Fighting Fantasy – The Introductory Role-playing Game adventure Shaggradd’s Hives. In the midst of the dungeon, an inn full of Dwarfs chat and laugh, and offer a fine range of drinks and tasy comestibles. I imagine they get into a fair few bar-room bust-ups with the local Orc patrols…

The adventure locations include a fair range of different encounters, traps, puzzles, rooms with unusual features, and non-combative inhabitants to interact with. I suspect you could run quite a lengthy adventure from the provided setting – perhaps even lingering after the defeat of the big bad to complete a mop-up sweep of the remaining rooms.

Critically, some of the room details could have benefited from more open thinking. For example, one of the earliest rooms in the dungeons gives the players the opportunity to sell items to a dealer in magical artefacts and components. It mentions a couple they will have found in the room before this one – but makes no reference to anything they might pick up later in the sequence.

Beyond the Dungeon
While the adventure itself includes information on the monsters and adversaries faced, the descriptions appear in a 22-page compiled bestiary at the end of the book. The back of the book also includes a 9-page catalogue of magical and blessed treasure, a 5-page set of menus for rooms where you can purchase items from the occupants, and the charts for combat and spell casting.

The spell-casting chart supports increased potential of magic-users, who can acquire more power by picking up items in the dungeon. A high level magic-user can throw more powerful and efficient spells – with longer duration, better bonuses, or greater damage potential.

In practice, you could use this information at the end of the book, along with loose ends from the adventure, to develop stories that come after while waiting for the next book in the series. The relative simplicity of the monsters and adversaries also means that there’s nothing stopping a budding GM from creating more to populate her own dungeons.

Final Thoughts
I find it interesting to see The Fire Demon: Death Awaits You! distributed through online booksellers rather than as electronic content through the likes of RPGNow or DriveThruRPG. It taps into the same market as the voluminous DestinyQuest books written by Michael J. Ward – but those target the solo-player market, rather than roleplayers who game in a group.

Content-wise, The Fire Demon: Death Awaits You! firmly harkens back to a very old style of play and adventure, potentially seen as outdated and outmoded in a modern of age of increasingly complex and engaging adventures. However, it does offer a dose of silliness and simplicity almost certain to appeal to young players or gamers with open minds and a spare evening.

My copy was provided for review. The Fire Demon: Death Awaits You!, Marcus Pletts, Strategic Book Publishing, currently £8.77 on Amazon UK, but also available through other outlets and in electronic format.

Doing It Old Style: A Review of The Fire Demon – Death Awaits You!

Geek Stuff The Book of the Dragonborn cake

Geek Stuff The AT-AT Walker bed – to protect against ni…
💰 Copper Coins 💰 Geek Native is an affiliate and may earn commission on purchases you make from third-party sites.
🍪 Privacy & Cookies 🍪 The site uses cookies to survive. By accessing the site, you agree to use your browser to control cookie use or take 1d4-3 privacy damage (tracking). If you defeat cookies via ad blocking, please consider the Patreon. An intro to cookies, and how to control them, can be found here.
I Manage Cookies