You are here: Home / Games / Tabletop & RPGs / Bring on the Eldritch: A Review of AGE Bestiary – Alien Horrors 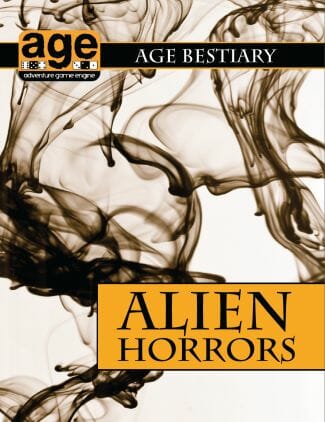 I have touched upon the notion before that in many industries, but gaming especially, if you don’t have an edition, expansion or supplement available for your game that takes advantage of the post-copyright extradimensional behemoth Cthulhu, then you’re missing out. Whatever your take on the Mythos, you need to get it out there.

Not to say that this is a bad thing. Cthulhu has appeal. Odd that, considering the monstrous and indifferent otherworldliness. It makes using the Mythos for pure horror a bit of a tough call – or necessitates a certain distance in form and phrase.

Form
AGE Bestiary: Alien Horrors is a PDF supplement, written by Jack Norris and designed for Green Ronin’s AGE tabletop role playing system, best known in the form of the Dragon Age RPG. The 6-page supplement includes a generic cover image and a small credits section, which means, with about 1/2 page of art and system logo, you get 4 1/2 pages of game-usable content.

The PDF supplement uses a two-column format throughout, with a colour palette that matches the AGE system logo. The statistics presented for creatures follows the standard block format and breakdown found in all AGE-driven games.

Features
In presenting the AGE Bestiary take on Alien Horrors, the writer has looked to spread his net as wide as possible. Alien Horrors neatly covers the disturbing extraterrestrial manifestations of Elder Gods, Great Old Ones and others. However, it also conveniently embraces the likes of armoured acid-spitting xenomorphs, painted-faced demons of Eastern mythology and even devilish overlords from popular supernaturally-themed teen-focused TV series.

The Introduction provides a page of background that covers Alien Horrors from the angle of folklore, popular culture and practical usage in your games. Of all the entries in the AGE Bestiary series, I think this one least viable as a straight addition to the Dragon Age RPG itself – simply because the whole business of demonic and spirit entities lies at the heart of the Fade, so the game already includes plenty of unearthly monstrosities. On the other hand, none of the corrupt and twisted entities of the Fade have quite the mind-numbing, soul-snapping quality of the Alien Horror template considered here.

While players might have had reason to reference previous entries in the series to create unusual character variations, Alien Horror lies firmly in the Gamemaster’s domain. The horrors of the unknown provide a tool for the GM to stretch the physical and mental well-being of characters with frightening entities and eldritch beings of unimaginable power.

Like AGE Bestiary: Beastmen and Giants before, the core of the Bestiary contains three examples:

While the Alien Hybrid stats up as relatively tame and suited for low level characters, the other two examples would tax a group of significant experience. If they’re not enough, the section on Customization provides additional thoughts and advice on modifying the threat level to create truly powerful adversaries, apex dimensional predators and unnamable horrors. The Alien Horror template provides options for Elite, Heroic and Epic varieties – the last of which would really make for an Extra-Celestial Spawn to remember, with more than 50 points total assigned across Abilities.

The final page provides some advice to Gamemasters for handling those players who really must have Alien Horror characters, but really really shouldn’t. Sometimes, a GM has to know when to rebut player requests, offering ‘No, but…‘ with a suitable alternative, like ‘How about you play one of these Beastmen instead?‘.

To finish, the supplement adds a new focus and an artifact, both dealing with the most vital of weapons against the unknowable and seemingly unstoppable, eldritch lore. If everything seems hopeless, break out the tomes and grimoires of forgotten and sanity-shattering knowledge – maybe your mind won’t snap before you have the chance to use it.

Final Thoughts
AGE Bestiary: Alien Horrors provide the essential elements a Gamemaster needs to add other-dimensional abominations to an AGE-driven game. With these Alien Horrors at hand, ill-advised magi can delve too deep and harness short-lived world-shattering powers when the Stars Come Right.

Compared to previous entries in the AGE Bestiary series, the examples run a little thin – and a couple more pages for the money could have offered a few more ready-to-use examples. However, Alien Horror certainly offers an interesting alternative to entities from the Fade and can fuel encounters and adventures against monstrosities that will make player’s wish their characters only had an Emissary or Broodmother to worry about.

Bring on the Eldritch: A Review of AGE Bestiary – Alien Horrors

TV Picture: Peter Capaldi as Doctor Who
💰 Copper Coins 💰 Geek Native is an affiliate and may earn commission on purchases you make from third-party sites.
🍪 Privacy & Cookies 🍪 The site uses cookies to survive. By accessing the site, you agree to use your browser to control cookie use or take 1d4-3 privacy damage (tracking). If you defeat cookies via ad blocking, please consider the Patreon. An intro to cookies, and how to control them, can be found here. I Manage Cookies