You are here: Home / Books / One for fans: Grimm – The Icy Touch 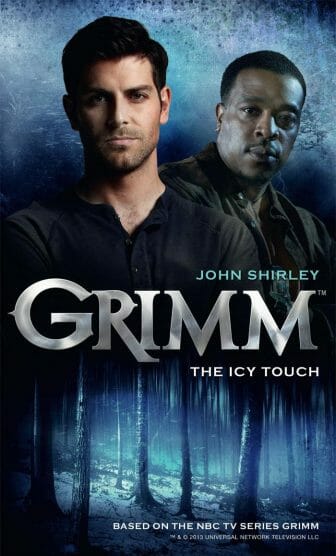 Fans of the NBC show Grimm may have a reason to skip re-runs in favor of a quiet evening in their comfiest chair.

John Shirley brings the supernatural thriller Grimm to the page in his novel The Icy Touch; An adventure staring the usual suspects from the show including Nick Burkhardt, Hank Griffin and Monroe.

The story is punctuated by common cop show drama cliches including donut jokes, a grumpy police captain, and a strained relationship between the detective Grimm Nick and his animal loving girlfriend. The characters, while inherently two dimensional and difficult to differentiate, seem to rely on the readers familiarity with the show for depth.

The plot features a conspiracy that spans hundreds of years which the author illustrates by foreshadowing future events in chapters where we meet Grimms of days past and formative historical figures like Napoleon.

While some of the present day character archetypes in Hank and Monroe appear conveniently relatable with their common sense in self preservation and over use of the words bro and man, the author demonstrates a flare for the dramatic with jarring exploits in 19th century diction that lends fresh perspective to the story during the flashbacks.

My biggest hurdle in reading this book was being mostly unfamiliar with the show. There were times reading the book when I suffered from mythos overload. There are so many references to woge hybrids and supernatural concepts that it eventually feels as if it’s insisting upon itself to be believable.

The overarching plot contains a good deal of action and disemboweling which makes up for the tedious dialogue, and there are times when the author demonstrates a delightful talent for painting a landscape while considering the animalistic instincts and abilities of the woge characters. Unexpected changes in scenery also aid in recapturing the readers attention.

Despite being predictable and contrived of typical buddy cop faux pas, the author proves capable of considering a world rife with supernatural sub cultures that I can assume comes off well to the fans.

As a stand alone novel I would hesitate to recommend the book because of its dependance on already confirmed ideas and bias from watching the NBC show, but for a fan who enjoys a quick seat-of-your-pants cop thriller based on David Greenwalt and Jim Koufs Grimm, The Icy Touch might make a good stocking stuffer.

Review by L. Meridian. A copy of the book was provided: Grimm – The Icy Touch, Titan Books, John Shirley, RRP £6.99.

One for fans: Grimm – The Icy Touch 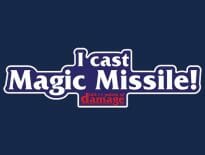 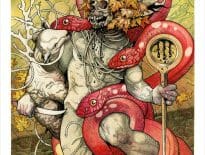