You are here: Home / Games / Tabletop & RPGs / Shadows Out of Time: A Review of In Strange Aeons – Lovecraftian Numenera As the title of the last Smash Up expansion suggests, an Obligatory Cthulhu Set has become de rigueur for any game line (heck… you almost have a Cthulhu Monopoly in The Doom That Came To Atlantic City). Seriously, not having a Mythos inspired expansion or supplement seems like shooting yourself in the tentacle).

Obviously, some games might find approaching that Cthulhu angle requires a reskin or some serious shoe-horning. Others, not so much…

Form
In Strange Aeons is a 12-page PDF supplement for Numenera, penned by Monte Cook (who also penned the d20 version of Call of Cthulhu). It features a front and back cover illustration, which means a 10-page count of text – though Monte squeezes a Recommended Reading list into the bottom of the back page.

The PDF contains a smattering of art, some repeated, of various squamous entities and mildly deranged, fetish-dressed cultist types. The cover image of a character raising his light source to gaze upon poised and pustulated Shoggoth certainly seems to get the point of the supplement across…

Features
The bulk of the In Strange Aeons breaks into three parts: how to run Numenera with cosmic horror front and centre; how to tweak the mechanics of the game to support that horror angle; and, a few choice examples of new Mythos inspired entities.

Bringing Lovecraft to the Ninth World considers the pervasive influence Lovecraft has had across a whole range of media and suggests a focus for Numenera on his core theme of cosmic horror. The Mythos deals with unfathomable and unnameable horror beyond our comprehension, pressing hard upon our grasp of reality.

The Mythos should rightly defy explanation because those who uncover it lack the words, concepts, or extent of perception to explain it. Sanity breaks down in the face of stuff that should not be. Numenera’s Ninth World lies a billion years in the future, which means it should also be pretty tough to encapsulate that world in simple words, pictures and concept.

If you think about it, explaining smartphones or The Cloud to someone from Tudor England – just 500 years into our immediate past – would likely prove a bit of an uphill struggle. Now consider the idea of explaining anything to someone when a billion years have passed by and a multitude of generations and civilisations have come and gone. And yet, the entities of the Mythos have existed for so much longer…

Whereas standard Numenera gaming deals with the wonders of discovery and the advantages gained from unearthing artefacts and oddities, Lovecraftian Numenera tempers this with lurking danger and unspoken horrors. Worlds have come and gone, technologies and histories buried and forgotten – might there be a reason for that? What doom came to those before us?

The tale end of this section considers Sanity as a facet of Intellect Pool loss, then Lovecraftian Descriptors and Skins picks up tweaks to flavour Numenera characters with Doomed and Mad, and skinning NPCs and creatures with Non-Euclidian, Squamous, Tentacular, and Unnamable. The Sea of Secrets almost certainly has reasons for keeping travellers in the dark about what lies beneath. Rugose guardians lie in wait…

Speaking of which, the final section – Lovecraftian Creatures – rounds out the supplement with full write-ups for Deep Ones, Shoggoths, the Great Race of Yith, and Mi-Go. In practice, this provides you with a brief, but robust, set of entities likely to challenge player characters for possession of numenera and hide more than a few of their own.

While too much information might threaten the reader’s sanity, I would have appreciated more hands-on examples and samples to accompany the discussion on the grim and threaten angle suggested for Lovecraftian Numenera. The Ninth World’s remoteness as a setting already stretches a GM’s talent to describe, so some brief guidance on pushing just that little bit further into a place of despair and pitiless madness would have been valued and appreciated.

Final Thoughts
In a gaming market saturated with Cthulhu spin-offs daubing Lovecraftian tropes across products as a means to simply sell another few units, Numenera genuinely has the angle to support it without a stretch. When you have entities that sleep through strange aeons and a world a billion years hence, combining the two seems but a small step.

If you want to add another layer to your Numenera game, one darker and more threatening, this might well be the obscene and mind-numbing angle for you. If you aren’t jaded or rendered permanently cynical by the onslaught of Cthulhu-branded gaming supplements, I believe this product’s well worth the look.

And, the very question of the demise of the other eight worlds in light of the presence of the Mythos – well, it makes exploration and discovery all the more dangerous and exciting. The next numenera your character uncovers might be the one that tips the balance and tears open a hole to strange, non-Euclidian realms best left undisturbed…

Shadows Out of Time: A Review of In Strange Aeons – Lovecraftian Numenera 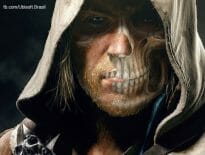 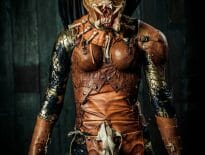