You are here: Home / Games / Tabletop & RPGs / They Might Be…: A Review of AGE Bestiary – Giants 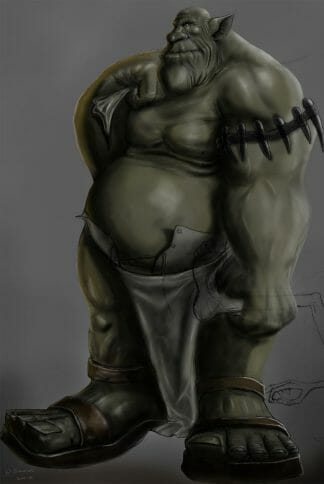 Giants have been an frequent and diverse threat in movies and TV over the last few years – whether the engineers of Prometheus, the Frost Giants of Thor, the trolls from Lord of the Rings, or Hodor from A Game of Thrones (okay, Hodor might not be a threat to most, but you still don’t want to get him worked up).

Of course, this recent threat of Giants has its roots in myth and legend, where the Giant commonly represented some state between gods and men, for better or worse (generally the latter). Oftentimes, the Giant is a failed experiment – the life created in the image of a god that proved a little too much like the original. Perceived a failure, the gods banish the Giants to distant lands and hope to forget them – but, invariably they come back with a chip on their shoulder and a foul temper.

Continuing the series of generic modules and characters for the Adventure Game Engine role-playing system, from Green Ronin, AGE Bestiary: Giants offers some mechanics, story and advice on introducing the brooding monstrosities to your setting of choice.

Form
AGE Bestiary: Giants is a 7-page PDF, with a slightly uninspiring generic cover page taking up one sheet. Illustrations of various giants, production credits and the AGE logo take up another 1.5 pages, leaving 4.5 pages of content.

The PDF uses the familiar colour scheme of the AGE logo, with a well presented two column format and crunch format common to all AGE products.

Most people will be aware of some of the Giants from myth, legend and pseudo-history – like those who once used the Giant’s Causeway between Ireland and England, the hulking Philistine warrior defeated by David, or the biblical Nephilim, the offspring of the Fallen, a leg bone of which a minister believed unearthed near Albany in 1705. The first page considers some of these Giants past, present and utterly fictional – and how a Gamemaster might introduce them in play.

Quite rightly, the supplement suggests introducing Giants when you want to hit your players with might, menace and a dose of the unpredictable. They have a lot of potential as an invasion force, whether as the heavy hitting mercenaries or artillery of a more human-sized army, or as a small contingent of angry ancient cast-offs determined to punish those who stole their land and birthright.

A key part of the mechanics are that we’re not just talking about cloud-scraping creatures here – though some advice on this does get covered in a sidebar. No, this supplement covers the likes of Hodor, from A Game of Thrones, or even the burly warrior Brienne, who have a stature that sets them apart, whether by fate or blood.

Giants bring on the damage, with some big hitting potential, but lose out on subtly, finding it hard to do anything that involves finesse or small targets. Just over two pages of material deal with Lesser and Greater Giants, as well as the Cyclops of Greek mythology. Then the mechanics cover some very useful ground with templates for Elemental Giants and Gigantic Creatures – so you can slap Gigantic on a Mabari Warhound and get yourself a neat Cerberus knock-off.

The supplement closes with the Half-Giant, where you really can emulate Hodor, Brienne, or any character played by the Dutch actor Carel Struycken. The option offers physical potential over social prowess, with some neat little tweaks to Stunt costs to emphasize the pros and cons of great size.

Final Thoughts
Jack Norris has put together a focussed and interesting supplement to the AGE system that increased my hankering for more generic AGE-related goodness (something Chris Pramas covered in the seminar “Dragon Age Role-playing and the Future of the AGE System” at Gen Con 2013).

The simplicity and flexibility of the AGE system supports interesting possibilities and AGE Bestiary: Giants pushes the envelope just a bit harder. Indeed, the author gives fair warning that a Gamemaster should consider any introduction of Giants, PC or NPC, very carefully. They represent a mountain of physical puissance that could leave your character party more puréed than bruised.

They Might Be…: A Review of AGE Bestiary – Giants

Geek Stuff Spooky Carnage cosplay versus sexy Black Cat
💰 Copper Coins 💰 Geek Native is an affiliate and may earn commission on purchases you make from third-party sites.
🍪 Privacy & Cookies 🍪 The site uses cookies to survive. By accessing the site, you agree to use your browser to control cookie use or take 1d4-3 privacy damage (tracking). If you defeat cookies via ad blocking, please consider the Patreon. An intro to cookies, and how to control them, can be found here. I Manage Cookies