A Kickstarter from the UK with free shipping to the US and the EU. Publisher 3DTotal (via “imprint” 3DTotal Games) has raised thousands on their first day on Kickstarter with 404: Law Not Found and are halfway to making their goal.

The board game deals with robots who have had their programmed laws scrambled. You’ll have to complete these new rules for them – but other players and pesky humans will get in the way.

Geek Native spoke to design Greg Carslaw about the project. We didn’t ask him to explain the 404 reference. That’s for geek natives to know.

Where on Earth did the idea for 404: Law Not Found come from?

Mostly from people who fantasised about being off Earth one way or another. I don’t think the idea had a single source, it’s more that I sought out lots of different types of experience and sometimes the things floating around in my head knock together in interesting ways. You can see inspiration from board games (Robo Rally, Space Alert) books (Asimov) computer games (SS13, FTL) as well as things I picked up studying psychology and AI.

The game is for 2-6 players and lasts about an hour – but how long does it take to learn? Is this one for experienced gamers?

It depends on how the learning is being done. If you have new players learning from more experienced players the game might take an extra quarter of an hour, but if everyone is new and players want to study the rules before starting the first game an take two or more hours. I playtested with a variety of gamers, from causal types who didn’t own any games and started playing designer games this year to hardcore gamers who’ve been playing for most of their lives and they all seemed to have a good time of it. I’m not sure someone whose only experience was Monopoly and Cluedo would fare, so while I don’t think you need to be a super experienced gamer having played one or two other games will help.

Do you have any conventions in the diary yet for demos?

Not yet, I was supposed to have been demonstrating at the UK Games Expo earlier this year until my spine rudely and entirely without my permission made an escape attempt. I’m fine now, but it took me out for a couple of days. Once 404’s being printed and I get a few moments to breathe I’ll have a look at the calendar and see what I can do.

3DTotal is well connected with the UK art community. How helpful is this with projects? I often hear the most expensive part of the game is paying for the art…

It’s been amazingly helpful, 404’s art director (Emalee) has consistently found artists who have exactly the right style, deliver their work on time and have very reasonable rates. As a partially colour-blind game designer with the artistic instincts of a landslide it’s fantastic to be so well supported in this respect. We compliment each other’s strengths and weaknesses very well :)

If 404: Law Not Found is successful what’s next for 3DTotal? More board games?

Absolutely! A big success for 404 would mean that we could put more resources into game development. The next game has already been through a few hundred hours of playtesting of its own, but I’ve put it on hold until 404 is done (some testers are complaining about that, so I guess that means it’s a good one.) After that I’ve got another dozen in various states of development competing to be number three. At the moment I’m most tempted by a coop about running a heist run entirely in real time with live action elements that interfere with each other (say while one player is stacking cubes to pick a lock another might be required to thump the table a certain number of times to subdue a guard.) That’s a long way off though. 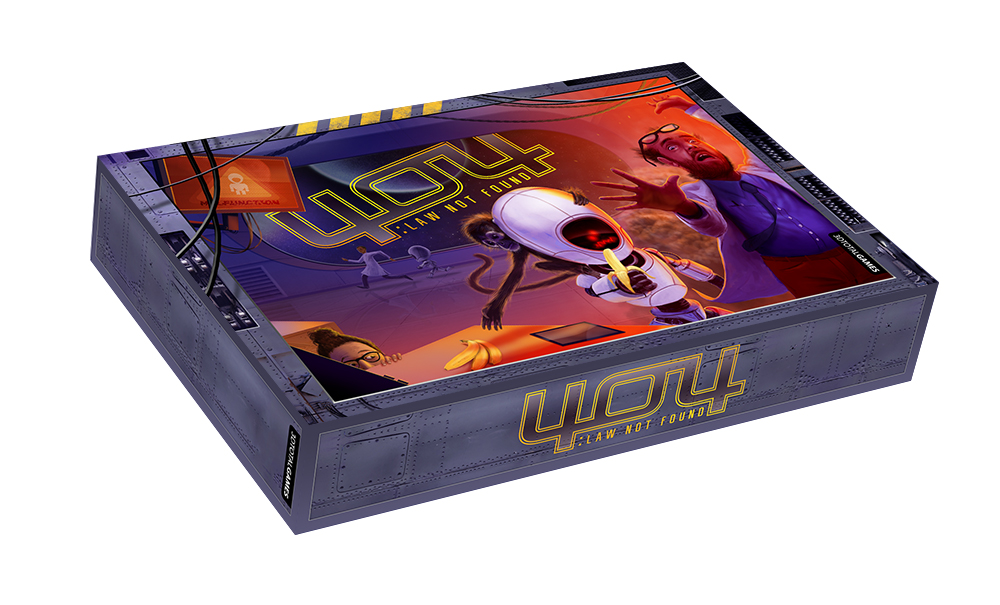 Comics A review of Sharky: The boy demi-god

Tabletop & RPGs Burn, Baby, Burn: A Porphyry – World of the …
💰 Copper Coins 💰 Geek Native is an affiliate and may earn commission on purchases you make from third-party sites.
🍪 Privacy & Cookies 🍪 The site uses cookies to survive. By accessing the site, you agree to use your browser to control cookie use or take 1d4-3 privacy damage (tracking). If you defeat cookies via ad blocking, please consider the Patreon. An intro to cookies, and how to control them, can be found here. I Manage Cookies