Calculate the AC on a spiky suit of armour. There’s a challenge.

This vintage armour is a real thing, surfaced recently by Retronaut thanks to Malcolm Kick. This is Siberian bear-baiting, or perhaps bear hunting, armour. The former is more likely because running around in this leather suit would be awkward at most.

The armour is in three parts; a leather jacket, trousers and an iron helmet. The spikes are 1-inch nails, about 3/4s of an inch apart. The nails are held in place by the second layer of leather lining which is quilted into place between the nails.

I imagine the armour would be far more useful in fantasy RPG settings than in real life. Characters spend less time on horseback and heavily armoured characters have already given up any chance of sneaking. Equally, the number of hostile creatures that either attack with bare claws or via constriction can be pretty high.

Would you allow the style in your game? Or is it just silly – even in a fantasy setting?

Via Cyriaque Lamar at Io9.

Update: March 2022 – 10 years after this article was posted, a commentator has called it into question. They may be right as Snopes gives the claims an “Unproven” verdict.

No it’s not it’s from an art exhibit. Why do you keep on posting stuff that’s incorrect?

Hi Paul, this is an article from 10 years ago that cites multiple sources. Okay, some of those sources don’t look like they’ve survived the last 10 years. Why would you come back to this now, stop here and not follow the chain back to the source?
Nevertheless, I’ve updated the article to note your concern, citing Snopes’ investigation and edited the Corrections page here https://www.geeknative.com/corrections/ 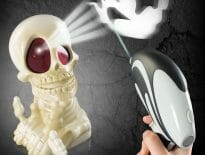