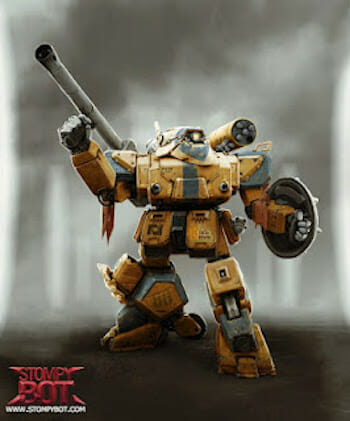 This is a guest post from Ivor Whitten of Wee Gamers. The Geek Native guest post series seeks out established bloggers from the geek community who can bring a fresh perspective to this blog’s news feed. Ivor and Wee Gamers are particularly good at covering tabletop games news.

It is official. Stompy Bot Productions will produce a Heavy Gear video game.

It’s expected we’ll see the game in mobile, PC and console form. In a press release they set out;

The Heavy Gear franchise has released dozens of sourcebooks detailing the settings, people, and machines of the Heavy Gear universe. The first Heavy Gear computer game, titled Heavy Gear, saw light in 1997 and its sequel, Heavy Gear II, was released in 1999. An animated series was also aired in 2001.

“We’re very excited to bring Heavy Gear back to the current generation of gaming fans,” said James Taylor, President of Stompy Bot Productions. Robert Dubois, President of Dream Pod 9, said “Dream Pod 9 looks forward to working closely with Stompy Bot Productions in developing the next incarnation of Heavy Gear’s 3D video game. Stompy Bot has the drive and talent to bring the world of Heavy Gear to life for all of our fans and a whole new generation of gamers.”

Stompy Bot Productions only started in May of this year so this is a good start.