You are here: Home / Geek Stuff / Interviews / Interview with James Norbury of the Corporation RPG 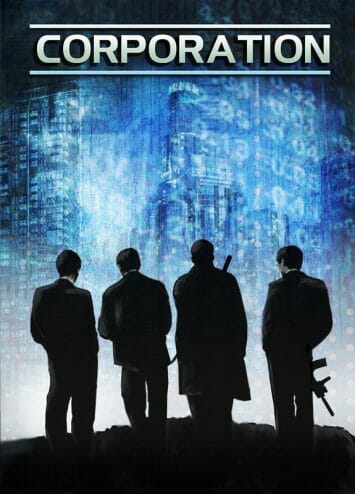 The Corporation RPG will always have a special place here at Geek Native. Why? They were one our first Twitter followers and you can follow their own Twitter account here. It took me a while but I finally managed to put some questions into an email and fired them off to James. To my delight; I got a reply!

1) Could you give us a whirlwind tour of Corporation RPG? What’s the setting? What’s the focus of the game?

Corporation is set in the year 2500 and portrays a world where five mega-corporations are the new world powers. Each of these corporations essentially owns a portion of the globe and all of them seek to expand their influence. You take on the role of a highly trained and lethally skilled Agent tasked with enacting the will of your corporation at all costs – whether through negotiation and diplomacy or espionage or murder.

Your choice of corporation influences how you will play the game. Although there are no strict classes or archetypes, each corporation has areas of speciality so it pays to work to your firm’s strengths.

A typical game would normally start with a mission brief from your superior; perhaps instructions to escort a VIP to a conference and to assassinate a defector while you are there, while retrieving some stolen intel from his hotel suite.

As you go about your tasks, though, you may discover that a group of Agents from another corporation has been given a similar task – or that there is a cadre of terrorists under the control of a rogue War A.I. besieging the building and you need to help the security forces hold them back.

In short, anything can and will happen in a game of Corporation. The setting mirrors our own world closely enough to let GMs draw copious inspiration from the conflicts, political squabbling and corporate manoeuvring that appear in the news every day. Then it adds a rich layer of intricate 26th century backstory, plenty of advanced weaponry, cybernetics, and other hardware, and a few tentative steps into near-space to open up almost endless possibilities.

2) Give us the elevator pitch… with so many sci-fi options out there why should gamers give Corporation a go?

Because there’s nothing else like it. The system was designed to be quickly accessible and endlessly flexible; you can pick up the rules in less than an hour and then use them to do pretty much anything. It’s a very dynamic system; combat is fast and savage and allows all manner of devastating moves with genuinely simple mechanics – and it doesn’t get more complex with more advanced characters, so you’ll never get bogged down in bookkeeping.

As for the gameworld, this isn’t another Cyberpunk game; there is no ‘punk’ in Corporation. Agents are impeccably suited, well-groomed professionals funded by monstrous, world dominating corporations. They also happen to be biomechanically augmented killers able to lose limbs or be hurled from tall buildings and keep fighting, which gives the game a very distinctive, Terminator-esque feel.

3) What about non sci-fi gamers? Is there anything in Corporation that might lure them into the genre?

Corporation gamers can take a relatively low-tech approach if that’s the way you want to play it. There is a strong focus on melee combat for those that prefer some old-fashioned knife work to futuristic hardware. There’s also scope for players to resolve their missions through tense negotiations with rival factions and world-spanning religious orders.

In fact, one of the corporations, Comoros, actively favours a low-tech approach; making use of more traditional methods and where possible relying on a more ‘human’ solution to a problem.

4) Which RPGs have been an influence on Corporation?

I always liked the scope and easy going nature of Dungeons & Dragons, I find its limitless potential very inspiring and set out to ensure that Corporation had a similar ability to run thousands of different games. Similarly, Corporation has a strong focus on raiding installations; which is essentially dungeon delving in 2500.

I also feel the old World of Darkness (Vampire the Masquerade and Mage the Ascension mainly) was an important influence. I very much like the ‘we walk among you but we are not like you’ idea. Agents are the equivalent of vampires or mages; they seem normal until they get hit by a car or shot in the head… then instead of dying on the spot they get up, wipe the blood out of their eyes and draw a sword. To me this, this takes some beating. 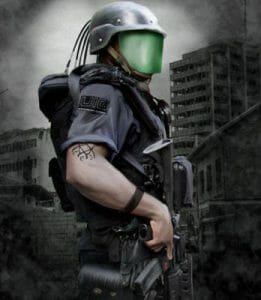 5) It’s sometimes said that finding mood music for sci-fi games can be a challenge. Do you agree? Would you recommend any music for before or during Corporation games?

Yes, we normally use music when playing. It varies between something electronic such as The Crystal Method or Fluke to music of a more heavy, industrial nature like Nine Inch Nails or Fear Factory. I’m not really one for changing tracks to suit the scene but this kind of music seems to suit most situations.

6) Which websites, blogs or twitter accounts would you recommend Corporation fans keep an eye on?

There is also a great forum which I haunt maintained by Arakor at http://www.deniableresources.co.uk

And of course our own website www.corpgame.com has a regularly updated blog.

7) You work with Mongoose. Can you tell us a little bit about that relationship? What do they do for you?

My responsibility is to provide them with proofed, print-ready PDFs complete with art and they do literally everything else. Printing, marketing, distribution etc. – all the things that I would rather not do! The relationship works extremely well. They give us total creative freedom: no censorship or deadlines. They might suggest book ideas but they are certainly not demands. Matt Sprange is a fantastic person to work with; despite being incredibly busy he’s extremely responsive, and is always happy to offer advice or direction when asked for.

8) What are the top three tips you’d give to anyone thinking of trying to write and publish their own game?

1. You must be inspired by your own game and want to play it day in day out. If you are not totally sold on the idea of your own product, how can you expect others to be?

2. Test it. Make sure it really works and don’t release it until it is. Of course there may be a few lines of errata here and there when someone works out a really contrived way to abuse your aiming rules etc, but for the main part it should hold together under a fair degree of scrutiny.

3. Lastly, and I think most importantly, get some thick skin (or heavy combat armour if you’ve got the cash) because from the moment you try to do something people will try and tear you down. Before Corporation was even released I was reading on forums about how it was going to fail, how there was no way we could compete with other games etc. When you read this sort of thing on public forums or receive letters telling you’re that what you’re doing is a waste of time it can be very discouraging… but you can always ask the more vocal critics if you can see their successful RPG so you can see what you’re doing wrong! 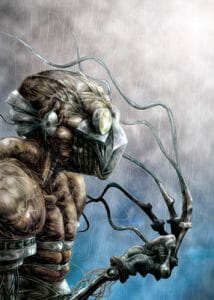 9) How do you go around marketing an RPG in this day and age? Which tactics have you deployed to get gamers to notice you?

Mongoose do most of our marketing, leaving me time to do more writing. For my part I try to be approachable and honest. I chat to people on forums and make sure I respond to everyone who contacts me. I also recently created a free booklet for distribution on Free RPG day which was a big hit and introduced a lot of people to the world of Corporation.

10) Have you had any problems with game piracy or people passing PDF copies of the game around? Do you think this is a real problem for the gaming industry?

It’s not been an issue so far, but then I guess it would have to be large scale for me to know about it and to be honest I don’t see it as a big problem. I personally would never use a PDF only version of a game because I like to browse the book from my armchair and then use it in the game. For me it’s simply not practical to use a PDF in a live RPG as I don’t like using a laptop while playing. I would hope that, if anyone did acquire an illegal copy of an RPG like Corporation and really liked it, they would go and buy the book. It’s not like DVDs where a good pirate copy can be indistinguishable from the original, so no, I don’t think it seriously harms the RPG market.

Thank you Andrew for the opportunity to do the interview. And remember, the Corporations are always recruiting!

I'm not sure. SLA was more gritty and grundgy – the dreams of a mad Glaswegian. This seems to be sharper and more direct.

I dunno, it makes me think of Cyberpunk sans the punk. Rather than playing the runner underclass, you're playing the suits who would try and stop them.

I'm a CORP player ,GM and regular on Deniable Resources. If you want a closer look at the game for free you could always download the FreeRPGDay booklet James designed.

Sorry, the link for the booklet doesn't seem to want to work directly. You can get them both from

Interview with James Norbury of the Corporation RPG