You are here: Home / Music / The struggles and adventures of Doctor Who pop music

There have been times when UK pop culture has met Doctor Who. It’s not always been all that great.

In 1988 The Timelords had a hit called “Doctorin’ The Tardis” that made it to number one. These are the same two people – Jimmy Cauty and Bill Drummond – who were behind the Justified Ancients of Mu Mu. That’s right; the KLF. It’s said that the two simply wanted a hit by the numbers and aren’t a fan of the song at all.

But that’s not all. The B-side to the Human League‘s “Don’t You Want Me” was a track called “Tom Baker”. The A-side may have flirted with the charts. The B-side did not.

Tardis all the way back to 1978 and you’ll find the 7+ minute long Doctor Who theme remake by Mankind. This reached number 25 in the popular music charts. It goes on for … a while.

Researched via The Nerdist and Love Hate Society.

The struggles and adventures of Doctor Who pop music 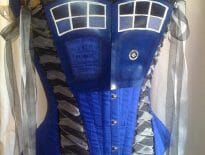