You are here: Home / Games / Console / Xbox Live to be baked into Windows 8

Brier Dudley of the Seattle Times had the chance to talk to Mike Delman of Microsoft at E3. He dug out some interesting responses.

It sounds as if the chances of an “Xbox Phone” are even higher than before although it may be a “certification” model that Sony are currently using with Android.

Q: How will your services and content be part of Windows 8?

A: There will be a lot of similarities in design and service philosophy. Whether it’s us or Apple or anybody else, people want to be able to navigate through multiple devices in a certain ecosystem very seamlessly so we’re committed to that.

It also seems likely that Xbox Live will be part of the PC. In fact, that’s exactly what Delman says;

Q: Speaking of phone, I was surprised we didn’t hear about connections between Xbox and Windows Phone here at E3.

A: Live has been successful on the Windows Phone. Live will be built into the PC. It will be the service where you get your entertainment. We were talking about it — you will not just see consoles and handhelds at this show next year, this show’s going to morph into other devices.

It’s worth keeping in mind that Microsoft have a “project” called Windows 8 which has a tiles option. These tiles will likely be HTML 5. The question is; is an HTML 5 widget from Xbox Live that can be included in this panel view count as “part of the PC”?

Xbox Live to be baked into Windows 8 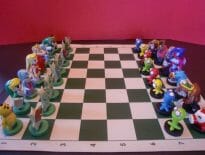