You are here: Home / TV / Who is Madame Kovarian? [speculation, spoilers] 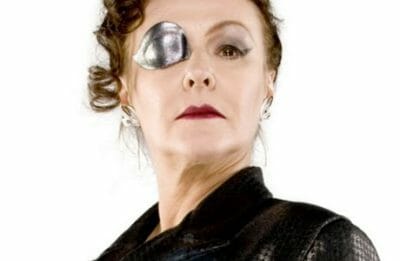 This is a blog post about series six of Doctor Who. It contains nothing but speculation and widely commented on factoids. If you’re allergic to spoilers – or rather, the possibility of spoilers – then stop reading now.

This post contains no actual spoilers (unless you’re behind in your Doctor Who watching) as it contains no leaks, previews or anything like that. This is entirely speculation based on fan chats about the series over lunch, dinner and in the pub.

In most – but not all – of the series six a woman wearing an eye patch has appeared. She slides open a panel, often in a wall, makes a comment about or to Amy and then closes the panel again. It looks as if she’s peering in from some other dimension.

She first appears in episode 2: Day of the Moon when Amy is exploring the orphanage infested with The Silence. Amy asks;

There’s no direct response. Instead, the woman – who fans are calling Madame Kovarian – turns to face someone we can’t see and says;

”No, I think she’s just dreaming.”

Her eye patch is metallic. It reminds me of Cybermen.

She appears again in the pirate episode; The Curse of the Black Spot. In this she seems to talk to Amy. She says; 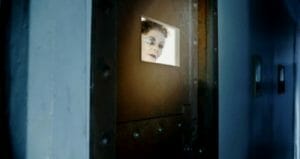 She also appears, once again behind the sliding panel, in The Rebel Flesh but says nothing.

Amy’s the only one who’s seen her. I and other fans connect Madame Kovarian to the child and Amy’s pregnancy.

The first mystery around Amy’s pregnancy is why the Tardis scanner shows alternating positive or negative scans. The first theory – given how The Silence abducted Amy and showed interest in her – was that the pregnancy is somehow Silence related. In keeping with the Silence’s powers the scan first detects the pregnancy (showing positive) but then forgets (showing negative). I’m not sure this speculation is that robust. There’s no evidence to suggest The Silence’s power works on technology.

A more common theory is that there’s a temporal flux and in one side of the flux Amy is pregnant but not in the other.

The key point The Rebel Flesh seems to be bring up is that there might be doppelgangers out there. We could have a pregnant Amy doppelganger/original and a not-pregnant Amy/doppelganger. It seems like an easy prediction to suggest the series will explore more along these lines later.

For that speculation to have more meat to the bone then Madame Kovarian would need to be important. If she’s the nurse maid to a future Time Lord – the child? – a child born in temporal flux, ie, Time Lord-like, then she might be that important. That might also explain why she’s checking in on Amy.

One final point of speculation is that Madame Kovarian seems to be looking in back on Amy’s life. How is that possible? Time Lords again? Or someone peaking in from a parallel dimension. Could Amy be in some sort of futuristic hospital, with Madame Kovarian caring for her and the child and is she simply running through memories or dreams with Madame Kovarian occasionally checking in?

Who is Madame Kovarian? [speculation, spoilers]

Art Amazing, scary, wonderful monster illustrations…
💰 Copper Coins 💰 Geek Native is an affiliate and may earn commission on purchases you make from third-party sites.
🍪 Privacy & Cookies 🍪 The site uses cookies to survive. By accessing the site, you agree to use your browser to control cookie use or take 1d4-3 privacy damage (tracking). If you defeat cookies via ad blocking, please consider the Patreon. An intro to cookies, and how to control them, can be found here. I Manage Cookies