You are here: Home / TV / Is the new Wonder Woman costume all that bad?

We now have pictures of Adrianne Palicki as Wonder Woman. It’s dividing opinion and I can spot at lot of grumbling. It’s interesting that it’s not just geek bloggers interested in this story; mainstream media are writing about this to.

FoxNews.com moaned that Wonder Woman’s stars and stripes had gone.

“The new and allegedly improved Wonder Woman (a.k.a Diana Prince) has been given a head-to-toe makeover by artist Jim Lee, replacing her signature American flag decorated briefs with skintight…pants and purging the super hero of all her trappings of Americana,”

Perhaps they thought Wonder Woman was supposed to be American?

Um, I’m sorry but this is not what I was expecting. This is just my opinion, but the Wonder Woman you see above does not look good at all.

over at TVSquad, Maureen Ryan wrote;

Remember how many of us were concerned about David E. Kelley‘s ‘Wonder Woman’ remake? Consider my concerns doubled after today’s release of the first image of Adrianne Palicki as the crime-fighting superheroine.

Are you kidding me? ARE YOU KIDDING ME? Look at that costume. There are amateur cosplay outfits that are better. And not the awesome crazy Japanese ones. I’m talking fat-white-guy-at-Comic-Con-dressed-up-like-Wolverine’s-fat-diabetic-brother-who-has-aluminum-foil-wrapped-around-cardboard-for-claws-type cosplay.

What Would Tyler Durden Do scribes;

She looks like a model for a Halloween website, and there’s no reason for it because it takes 3 seconds to run a search and find a hundred sexier Wonder Womans.

Serious and non campy is NOT what I was expecting after what we have heard so far on the series, and this costume definitely goes against that! It’s ok though. I think it’s a bit OTT with the bright colors, but that IS how Wonder Woman looks in the comic right? Could be better, but it could be a lot worse! Miss Palicki looks smoking at any rate.

I’ll tell you what I think. I’m glad the Americana has gone but Wonder Woman’s still coloured in American colours. No one’s suggesting she’s been dressed in the whites and greens of Islam, are they?

I’m not sure this costume suggests gritty in any way what so ever but maybe it’s been designed to be dirtied, stained and torn up.

I’m glad the swimsuit she had to strut around in in yester-years has gone. That simply wouldn’t have worked today.

I agree — it’s too soon to say whether the new TV show will be any good, and the Wonder Woman costume isn’t as horrendous as some seem to think….

I think is really bad and far far from the original costume.

But if it is going to be a kid’s series no problem.

it not bad, why don’t let the new wonder woman show what have it got! it’s too early to comment…..may be the designer has its reason…..

Okay, hold on. Wasn’t the whole point of Diana’s costume being a sign of respect and peace to the US when she went as Hippolyta’s emissary/ambassador? This costume doesn’t reflect that. It looks like some Barbarella crap you’d find at Party City. At least Linda Hamilton’s WW actually looked like WW.

Okay, hold on. Wasn’t the whole point of Diana’s costume being a sign of respect and peace to the US when she went as Hippolyta’s emissary/ambassador? This costume doesn’t reflect that. It looks like some Barbarella crap you’d find at Party City. At least Linda Hamilton’s WW actually looked like WW.

Is the new Wonder Woman costume all that bad? 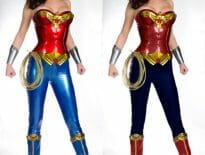