You are here: Home / TV / New Heavy Metal series will be a live action

The animated Heavy Metal movie is a cult classic. I remember it fondly. My ears perked up when I heard that the French company who own the franchise have successfully pre-sold the show, based on the pilot, to more than 20 countries.

Variety has the news but also the twist in the story. This will not be another animation. This will be a live action movie!

Now I’m concerned. How could this work without being naff as hell? I’ll admit that if We Productions and United Humanoids (both companies with cool names) manage to make it work then it’ll be awesome – but is that an impossible challenge?

We’ll have to wait until January 2012 before the first two seasons are delivered.

As a reminder; here’s a clip from the original movie.

Heavy Metal (or Metal Hurlant as its called in its native France) is a comic series first and foremost. It was set up by Moebius (aka Jean GIraud), Phillipe Druillet and co back in 1974. It’s older than me.

The Pilot has some fairly big stars – perhaps this is a good sign. David Belle (from Prince of Persia) and Jean Yves Berteloot (from The Da Vinici Code) are in the two-parter.

New Heavy Metal series will be a live action 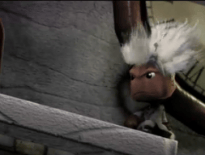