One of this blogger’s favourite RPG systems – and I’ve seen a lot – now has an open license.

Monte Cook Games has just had another smash hit Kickstarter, a strong one with Old Gods of Appalachia, their 10 year-Anniversary and now have opened their game engine to third party developers.

Publishers are invited to capitalize on the commercial success of the Cypher System (as evidenced by nearly $3 million in Kickstarter funding this year alone, as well as ten years of Monte Cook Games products) and make the most of its amazing flexibility, ease of play, narrative focus, and fun gameplay as they bring their creativity to life. Open licensees will be able to create adventures, settings, supplements, and even entire, self-contained games using the Cypher System, and to modify, change, and add to the Cypher System rules as best serves their vision.

Some games have already been announced for Cypher System Open License (CSOL). They are; 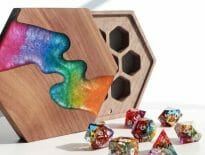