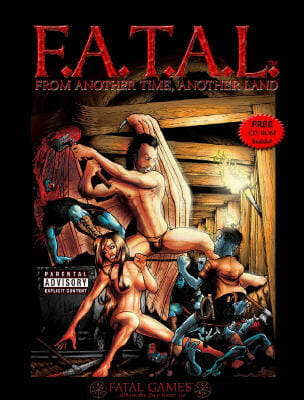 Readers’ Note: The following is a user submitted review – spelling errors and all – which was submitted to GameWyrd in 2005. GameWyrd was later replaced by Geek Native and this review came with the site.

There is a copy of the F.A.T.A.L RPG here (some readers report major browser slowdowns). This review is kept up as its so strangely popular…

F.A.T.A.L. (From Another Time; Another Land) is anomst many things, about being a realistic medieval fantasy RPG.

I will get the negatives that in the system out of the way first. Many people tend to focus on the sexual content that in contained in F.A.T.A.L., but it’s easy to ignor. I personally do not use the sexual content and “graphic gore” rules which are basically critical hits in F.A.T.A.L. terms. Whenever a critical hit is rolled in F.A.T.A.L. the player is supposed to make another roll and look it up on a specific table for the hit location to determin the exact amount of peices your femur is shattered into when hit in the uppper leg with a bashing attack (I’m exagerating a little bit, but not much). I don’t use it, I just consider the body part to be destroyed. Now for the juvinile sexual content. Like I said, I don’t use it. I consider it to be immature, stupid, and unessasary. Overall be prepaired to throw politically correct out the window and be able to pick and choose what you do and do not want to use. Now for the worst negative, character creation. It takes about 3 hours to completely make a decent character that you like (you can easily half ass a character and make one in about an hour). Hope is in sight however for the author of F.A.T.A.L. is working a complete and detailed character generator (unlike the crapy and unflexible verson that’s avalible right now).

Now for the positives. Like I said, it’s realistic. If you get stabbed in the chest with a sword you probably won’t live, espeshally with medieval medicine; this is true in fatal. Make sure your character becomes very familar with armor and the dodge and parry skills because it will save your character’s life and save you 3 hours of time. I must admit the HTH combat isn’t very great… but it works. There are rules for almost EVERY situation your character could be in. There are rules for the speed lost when running up a hill, or wadding though water. You get to customize the fulcrom point (balancing point) of your weapon and there’s a program that will give you a delivery penilty and a damage modifier, based on your fulcrom point, that makes sense every time. The math behind the game is amazing. Although admitidly overwhelming and unnessary for some. The combat runs smootly and has an intense, violent, bloody, rated R feeling; and more inportantly, you can actaully get a clear picture of what’s going on during combat (unlike in d20, ok I got hit for 5 hp but where?). Also, initiative is more then just a random measure to determine who goes first; it’s actually a simple equasion from the combination of several variables and it makes sense. Try out the combat simulator at www.fatalgames.com and you’ll see what I mean.

Overall if you’re looking for a game with a realistic and detailed medieval combat system then look no further. Currently the full verson of F.A.T.A.L. if avalible at www.fatalgames.com for $20.

For the love of all that is holy, run a spell check next time you do a review.

I think it's worth noting that this guest review is one of the many copied over from GameWyrd. There we allowed anyone to submit a review but also anyone to rate it – a sort of self correcting balance. That system is present here through the Outbrain star system (this review has been rated 8 times for an average of 1.22 stars so far!) but it's not quite the same thing. Sadly, cp900561, who wrote this review back in the day isn't likely to get these comments. Comments actually help promote the review. The best we can hope for in… Read more »

While I can appriciate the reviewer's effort, considering his or hers obviously failing eyesight and addled mind, this review is not right. As the game itself, it is just plain wrong.
FATAL has no redeeming features. It is a complete mess of overly complex, labyrinthine rules(and bad rules at that), more inane tables than you can shake a dead whore at, and just plain bad all around.
This game(all 1000 pages of it) deserves nothing more than to get chucked into a dark corner, to be forgotten and to die there. Please let it.

I’ve seen a LOT of people disparage FATAL. 99% of them have never read the game. At first, I believed what I had heard too, but after obtaining the game itself and reading through it… Well, this reviewer is actually pretty truthful about it. The game isn’t bad at all, although the system is complicated and the results are extremely detailed. I can understand that many roleplayers will feel uncomfortable with a game that deals with so much detail that it requires an adult maturity. And I mean “adult”, not just old enough to be legally adult, but to be… Read more »

…What. Why would anyone complain about the combat system of all things? Why not complain about the absurd amount of positive emphasis on rape, extreme misogyny, and the undeniably racist magic items? And 1000 pages of this shit. The insane part is that the creator seems to want us to take this system seriously. I could understand it as a parody, easily, but does he really expect people to be dead serious as they say, “Okay, I’m going to roll to anally violate this infant bugbear.” while sitting around a table surrounded by their friends? I can understand having rape… Read more »

I wish there was a mouthdrop emecon….This is wrong. This Review is…Wrong. Its like watching a film that simply shows a man defecating, vomiting and raping women (With Huge ears and noses that say “Oy vey”) on a grainy film camera for 97 minutes and saying “Well if you take out the Crappy film quality, the raping, the defecating and the vomiting, and racism, the movie was good”. This is NOT how you review something. If you simply go by whats “Good” then House of the Dead is a GREAT movie. In fact, the act of rape in itself is… Read more »