You are here: Home / Games / Tabletop & RPGs / The walls are closing in! – or How to wrangle players and puzzles when the time is running out

Shaun Sunday is a Brisbane based artist and game designer who runs the competitive actual play series called The Shifting Spire. The Shifting Spire airs live on Twitch, and then the curated clips appear later on YouTube.

What’s “competitive actual play”? Good question. Shaun describes it as D&D meets Takeshi’s Castle. If that summons to mind the different adventuring parties trying to explore into a dungeon and a competition to see how far they get in the time they have, then that’s spot on.

Except, and the clue is in the name, in Shaun’s show, it’s not a dungeon; the arena is a tower.

I thought it was an exciting concept. It very much brought to mind one of the dungeons crawling challenges I used to face as a DM, and that’s what to do when the heroes can’t make a decision. Do you just wait until they figure it out?

Given that Shaun has a live show and people watching, that time factor is twice as important.

So, after a few emails back and forth, Shaun kindly agreed to write a post that walked us through occasions when the ticking clock has been a problem he’s helped overcome.

“The walls are closing in!” – or “How to wrangle players and puzzles when the time is running out.”

A common meme in the community is “watching players take 45 min to open an ordinary door” or revealing that the “super hard puzzle” is actually from a book of brain teasers for 5-year-olds.

And look, honestly – sometimes players are gonna overthink things for a multitude of reasons and get stumped by a puzzle in the heat of the moment.

It’s happened, or will, to all of us that DM at some point.

In fact, it’s happened to me regularly. When there’s a time limit imposed for some reason (the walls are literally closing in, the room is filling up with water, maybe the volcano is gonna erupt or any other in-game reason) you’re going to need some tools at your disposal to wrangle the players in the direction they need to go. If you want to give them a fighting chance, that is!.

On both episodes of my show so far, I’ve had the whole party get stumped by a trap, that I planned the solution specifically for them if they could figure it out!

Here, the time limit is that the players have to get as far up a 10-story tower as possible in a 6hr session.

Once that timer runs out – game over.

Let’s talk about ways you can deal with stumped players, and you want to be a kind and benevolent DM – and get the most fun out of your session!

Stump #1 or: “The Cat’s In The Cradle and The Tortle’s Doomed”

Episode 1: The Band of Badgers emerge into the Bestiary; out of the corner of their eyes, they see it – a corridor filled with large, spiked logs, swinging back and forth.

Too low to duck under, too high to safely climb over – the only way through the corridor is to hop from log to log.
Or is it?

This is an aged trap; the chains are pitted and worn, rust gathers in the depths of each link.
Suspended from the roof by pitons jammed into the ceiling and walls, a firm swing of a warhammer or a blast of fire from a quick-thinking mage would bring the logs crashing to the floor.

What did they do instead?

The Tabaxi and the Kobold had little trouble jumping across the logs.

The Tabaxi and the Gnome wizard decide to try creating an intricate series of pitons linking rope to try to lever up the Tortle and the Orc to help pull them across the logs to safety.

With the Dice Gods not smiling upon them, they didn’t do a great job.

40-ish minutes later, with the time ticking away, I decided to step in as DM and offer a hint.

“Hey Elias, you just used your action, but do you want to do anything else while you’re up there? Look around, interact with anything?”

Instantly, you can see the gears turning in the players’ mind – they ask for an investigation check, and it’s revealed that the chains – while sturdy, are old and pitted. If heated, they might melt and stretch or snap.

They could potentially be destroyed with fire, acid or brute strength.

“I want to cast firebolt at the chain on my next turn!” says Elias, the lightbulb having gone off in his head.

With a few short blasts, the logs come crashing to the floor, and the big and less agile characters can make their way through with minimum damage after a couple of dexterity checks.

In this case, a very gentle reminder to the player that they can look around, probe for solutions and use their powers creatively – gave them the answer they needed.

Episode 2: Indigitek are making their way through the ground floor.

It’s been an hour; they need to get to the next floor asap to make up time if they want to beat the Badgers’ record.
In front of them is a hallway filled with lightning blasting from small sockets at regular intervals.

The lightning is dangerous, but not deadly – to most, and designed to be negated using a shiny bowl stashed in the kitchen to redirect the arcs.

After exploring a little bit (more time passes), they find an NPC that I use to plant the seeds of interest to find and explore the kitchen (they take him prisoner).

In the kitchen, they find some rations and a special, ceramic, reflective bowl – I pour on the sauce about how special, and interesting the bowl is, and they decided to take it with them.

After tossing the NPC through the lightning arcs and noting that it would hurt, but not necessarily KILL them (each time they pass through an arc it would do damage), they decide to go off and explore the FAR SIDE of the tower, well and truly away from the stairs they were desperately trying to locate, and taking the solution they already had with them.

I had to be a little more direct for this one – I could let them keep exploring, but they would lose MORE time.

So I took the more heavy-handed, freely offering information approach: “looking closely at the ports and the lightning, you think that maybe you could block the flow. With something Non-Conductive.”

They grab a nearby piece of glowing stone that had fallen from the roof, laced with a magical copper alloy – and immediately get zapped.

“So, maybe you should try it with something non-metallic, something reflective? Maybe something you already have?”

It hits them – the shiny bowl, of course!

They put the bowl in front of the current – it blocks the lightning, and they can pass safely!!

Sometimes, while wanting to challenge your players, you also want to support them and see them succeed!

So, in this case, I fed them the information as directly as I had to, to let them get through the puzzle and make up for lost time and have a shot at beating the current record.

When it comes to puzzles and time limits, you have to make a choice.

Do I want my players to solve this on their own, or do I want them to make it through this challenge and have a good time?

Here are a few handy tips for dealing with this when it crops up in your own games:

A few things to avoid for the sake of accessibility and inclusion:

It’s the nature of the game, and everyone did their best!

At the end of the day, the most important thing is that everybody has a good time.

Shaun Sunday is a DM, player and content designer with a passion for creative ways to use the game.

When not making D&D content, Shaun can be found streaming while drawing comics, talking about them on his talk show No Capes or designing board games!

If you’re curious, you can see the next episode of The Shifting Spire at Brain Beast Studios on the 22nd of May, when Team Letofski is due to take a crack at the tower.

Have you come across problems with ticking clocks and players not quite getting into the zone while you’ve been in the DM’s hot chair? How did you solve the impasse?

The walls are closing in! – or How to wrangle players and puzzles when the time is running out 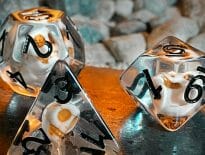