Modiphius Entertainment has today opened up the pre-order for Achtung! Cthulhu 2d20.

The launch has different books. You can pre-order the Player’s Guide, Gamemaster’s Guide, Black Sun Exarch Collector’s Edition, GM screen, as well as Black Sun and Blauer Kristall dice. These are supported by bundle deals, too.

The 2d20 version of the World War II meets Cthulhu mythos game is nearly two years in the making and is expected to ship in the summer of this year.

The Quick Start is free, so you can check out a 48-page teaser of the game before spending any of your shiny coins.

Geek Native’s been able to speak to Bill Heron who is one of the writers on the core rulebook and campaigns for Achtung! Cthulhu 2d20.

First up, can you tell readers what Achtung! Cthulhu is? Is this a rerelease, a new edition or something else?

It’s a bit of both. Achtung! Cthulhu was originally released as dual-stat setting back in 2013 (for the Savage Worlds and Call of Cthulhu 6th Edition rulesets) . Since then the setting grew with two massive campaigns , sourcebooks and a number of smaller adventures including the Zero Point series.

This new version uses the award -winning Modiphius 2d20 system found in Star Trek Adventures, Conan, Dishonoured, Dune, and Mutant Chronicles and others. It’s given us the chance to expand on the original but bring it more into a ruleset of its own.

What’s the atmosphere of the game? Who will it suit?

It’d suit those with a taste for two-fisted pulp action with an added cinematic flourish. Influences include Indiana Jones, Hellboy, Doc Savage, Overlord, the Rocketeer, Captain America (or even Iron Sky). The Nazis still remain the biggest threat in WW2 but they’ve co-opted creatures of the Mythos to work for them. It’s *never* the other way around.

A Secret War rages between the Allies and Axis powers – secret bases occult rituals and ancient cities feature prominently for example. It’s for gamers looking for espionage, chinning Nazi sorcerers, and basically fighting for the survival of the human race.

Call of Cthulhu, which many readers might consider The RPG with “Cthulhu” in the title, is often about careful research and then sudden cosmic horror with a messy ending. How does Achtung! Cthulhu contrast to that?

There’s the opportunity to be something a little more heroic than just pottering about a library or morgue looking for clues. In Achtung! Cthulhu you might be going tank hunting, teaming up with a group of Infantry – or the tank is hunting you.

There’s more than just “Big Bad turns up, everyone turns bibbly”. As it is set during WW2, there is the opportunity to level a place with artillery, if the characters have that kind of pull – it encourages players to deliver bon mots while punching Nazi-created horrors . There are still elements of cosmic horror, but for the time being the world remains safe (but for how long?). It also includes rules for characters who want to wield battlefield magics based on Celtic or Runic traditions – although there’s a cost.

As its WW2, war has it’s own sense of alienation and stresses, so the system reflects that – many soldiers have seen dreadful things by the end of WW2 so there’s not so much call for sanity rules. There is stress though, both mental and physical.

Can you tell us about the Black Sun, the Nachtwölfe, Majestic and Section M?

– Section M are an offshoot of Great Britain’s Military Intelligence Section D (“Destruction”, later MI6) in 1939. It’s very much a small “well-connected” organisation funded “under the table” and from back channels by the government in Whitehall. Well aware of the Nazi occult threat posed by both Black Sun and Nachtwölfe, Section M also have to deal with threats from creatures such as Deep Ones and the Mi-Go, as well as other threats they encounter as WW2 progresses. They also form the frontline with individuals of other nations against the Axis powers

– Majestic are the US equivalent of Section M, formed in 1942 to combat the occult threatening US interests. Already aware of the Mythos through Section M and their own experiences in Innsmouth and later, they have cutting edge tech the Brits don’t. they also discover their own resources such as the She Xelit glass, Pathfinder Demon Hunters. They also research psychic powers, and lend many of their experts to Section M before 1942.

– Black Sun are occult sorcerors playing a dangerous game. An offshoot of the Thule Society and Himmler’s personal interest in the occult, these secretive cultists worship the Black Sun, an aspect of the Elder God Yog-Sothoth. They are protected by Himmler and his SS, who is unaware he is being played for a fool by Reinhardt Weissler, the Exarch of the Black Sun.

– Nachtwölfe are formed by Mina Wolff to search out ancient tech and Hyperborean ruins. A former protégé of Weissler in Black Sun, she engineers a split from Black Sun that is never forgotten. Nachtwölfe – the Night Wolves – are scientists and engineers. They lack any form of ethics, morals or compassion. The ends justify the means – and Mina is also playing a much longer and larger game. They also ally themselves with the Fungi from Yuggoth, the Mi-Go, although this relationship turns sour.

Is there a sense that the Black Sun command more mindshare than the Nachtwölfe when it comes to these sinister groups? What can GMs do to make the night wolves even more terrifying?

Both survive in the Nazi regime due to a number of factor. Black Sun survives owing to Himmler’s patronage and Weissler’s magicks. On the other hand, Nachtwölfe produce many wunderwaffe “wonder weapons” like the terrifying Draugr (a living bio-virus consuming living and dead flesh), super soldiers, or cybernetic enhancements. They also make use of Blauer Kristall, blue crystals powering many of their many devices. A horrendously powerful energy source, it’s true nature manifests itself later as the Blue Madness. The subjects are driven insane by the whisperings of Sarthothus, the Sundered God, whose will manifests through the crystals. The victims still function… mostly.

Nachtwölfe are human but their true terrifying truth is that they don’t care: they sign requisition forms for human subjects, or test their weaponry on non-combatants, without a care. They aren’t driven by the Mythos, they further Nachtwölfe – and the Reich’s – ends. Their tech is designed to be psychologically terrifying and efficient.

What sort of encounters could player characters have with the Nachtwölfe.

As Nachtwölfe are constantly testing out their devices and seeking out more Blauer Kristall, characters are likely to be sent to find out what they are doing. They are also often deployed alongside Back Sun despite their differences, and the regular Wehrmacht. Augmented Stalkers, Kolussi and Sturmtroopers are likely to be deployed on the ground as close combat threats but the true threat comes from their blauer kristall weaponry.

Vehicles like the Reisenhammer tanks, the Grendel, and Jormungundr all pose significant threats to vehicles and the characters. Starkemeisters, the Nachtwölfe commanders, wield blauer kristall powered force plates: they can pick up and hurl a tank with these. They only gain the rank once they have crushed an Allied tank crew on their own.

Let’s avoid spoilers, but what can you tell us about the Forest of Fear?

It’s set during the Battle of the Bulge in 1944, deep in the forests of the Ardennes in Belgium. There’s familiar HPL monsters (some with a very different take) and new ones – one is particularly sinister in my opinion, plus some hissably-good villains (not Serpent People!). Plus Black Sun and Nachtwölfe pursuing their own agenda as the Battle of the Bulge begins. There’s a whole lot of underground shenanigans involving the Elder Thing city beneath the Ardennes and a search for some ancient Celtic artefacts. A few new factions are also introduced into the conflict, which may not necessarily go the way the players wish…

Some potential GMs might be a bit daunted by the need for historical research before tackling any scenario for Achtung! Cthulhu. Should they be? What tips do you have?

There’s a tendency to deep dive into history for historically-based games, and while it’s useful to know a bit of background you don’t have to go into the winemaking traditions of 16th Century monks of the Ardennes region. There’s plenty of information online about many locations, including floor plans and photos from WW2, and the campaigns will have recommended books. If all else fails, A!C only has to be historically accurate as the GM wishes it (and can get away with it!). 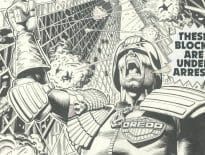 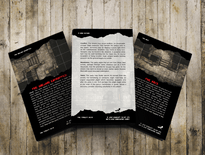 Tabletop & RPGs Donate to The Trussell Trust and treat yourself to…
wpDiscuzComment Author Info
Manage Cookie Consent
This site uses cookies 🍪, and links are ads that may earn bloggers some money 💰, and with this alert, I very much hope that these dark truths 🧌 are acknowledged.
Manage options Manage services Manage vendors Read more about these purposes
Preferences
{title} {title} {title}
Loading Comments...